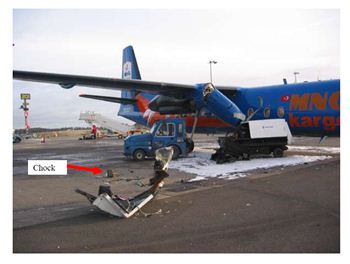 A PLANE crash at a Scots airport where ground staff were forced to run for their lives has been blamed on the aircraft’s ‘handbrake’ being left off.

The ground staff had to flee to safety when the 37-year-old Fokker Friendship aircraft began to edge forward while preparing for take-off.

An Air Accidents Investigation Branch report on the crash at Edinburgh Airport last February has lifted the lid on the dramatic tarmac collision.

And although investigators have been unable to pinpoint the exact cause, they have suggested it could have been the equivalent of the plane’s handbrake not being engaged.

The twin-propeller cargo plane crashed into a portable power unit causing “substantial damage” before coming to a shuddering halt.

The impact of the collision pulled off the power unit’s heavy cover and threw it across the tarmac, while part of the plane’s engine was also ripped off.

Airport bosses have admitted that there were “important safety lessons” to be learned from the near tragedy.

Fire crews were on the scene within two minutes but failed to locate the chocks – wedges used to keep the aircraft in place – although two were found within the wreckage of the power unit.

The on-ground Air Marshall told the investigation he did not remove the chocks, and the pilot of the plane insisted he had not asked for them to be taken away.

Investigators replayed the black box recording and the two pilots can be heard going through their safety checks.

But the investigation team has revealed they did not hear a verbal response to the challenge “parking break set”.

A spokesman for Edinburgh Airport said: “Clearly, there are important safety lessons to be learnt from this incident. We continue to work with our airline partners and handling agents to ensure they adhere at all times to the operational safety procedures at Edinburgh Airport.”

Jim Ferguson, a respected aviation writer, said: “These types of incidents, even worldwide, are very rare.

“There is an extremely well tested and established set of procedures for working airside at airports and these are, on the whole, very well adhered to.

“From the report you can see there has been some sort of confusion on the flight deck as to what they were doing, but I’m sure lessons have been learned.”