By Cara Sulieman
A 100-YEAR-old grandmother was left dumbfounded when she was invited to send her children to boarding school – despite the fact they are pensioners.

Gobsmacked Isabel Archer received a letter from Longridge Towers School, near Berwick, inviting her to come along to the open day for parents of children aged 5 – 10.

But with a telegram from the Queen under her belt, Mrs Archer’s offspring have long left school and had kids of their own.

And it’s not the first time Mrs Archer has been mistaken for a younger woman; when she was 80 she received a letter from Edwina Currie congratulating her on being able to vote for the first time.

Fast approaching her 101st birthday this April, Isabel has two children – Robert, 65, and Ruth, 62 – both of whom are pensioners, and an 18-year-old granddaughter, Alex.

And the letter was received from a school over 20 miles away in Northumberland, meaning the centenarian and her brood would have to travel across the border to take up the offer.

Isabel became a local celebrity last year when a horse race in Kelso was named after her to celebrate her milestone birthday, making the incident even more embarrassing for the school.

But her daughter, Ruth McGrath, said the family had a good laugh when the letter arrived.

She said: “My mother must look young for her age. She’s got sparkly blue eyes; maybe that’s what it is!”

“The letter from the school arrived addressed to her and when she opened it she realised she had been invited to an open day at the school.

“It urged my mother to go along with her children and see what the school was like.

“My husband rung the school and explained what had happened. Apparently they had had quite a few phone calls from people complaining about the letters.

“They got an external company to provide them with a mailing list but it obviously wasn’t tailored to their needs. Unfortunately a lot of people who it was inappropriate to send these letters to got one.” 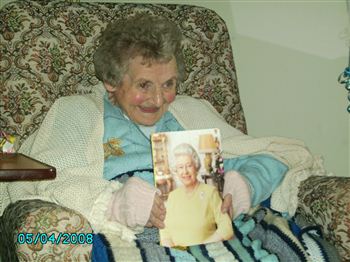 It is the second time in as many decades that Mrs Archer’s age has been underestimated.

When living in England in the 1980s, Isabel received a strange letter in the post from Edwina Currie, who was running to be elected for the Conservatives.

She was congratulated on being able to vote for the first time in the upcoming general elections, and Ms Currie hoped she could rely on Isabel’s vote.

Again Mrs Archer, then in her 80s, took the mistake in her humorous stride.

Ruth said: “She just thought it was the funniest thing.

“It’s a story we tell every now and then to get a giggle, but I never thought a similar thing would happen again.”

The headmaster of Longridge, Anthony Clemit, tried to play down the confusion, insisting the school had received a lot of positive feedback.

He said: “We are aware that some of the recipients of this mailshot may no longer be interested in seeking education for their children.

“On the other hand, we have been delighted by the response of many people, including past pupils and parents, who, while not seeking education, have taken the trouble to contact us and to share with us their positive connections with the school.

“We are pleased with all responses because they all help us achieve our aim of making the school’s name known far and wide in the region.”