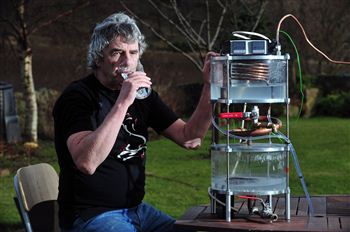 A SCOTS-BASED granddad has invented a process that could save millions of lives across the globe.

His unique process involves de-salinating water using renewable energy that can also be used to grow trees and crops in a desert environment.

The process would involve taking seawater and pumping it, using a water driven pump, into a lagoon where it receives solar energy.

The sun would then shine through the water onto a black absorbent plate that would heat the water to around 75 degrees.

The key stage of the process would see water flowing into a de-gassed chamber where it losses its impurities.

Sven has built a small prototype to illustrate his idea and now hopes to encourage investors and manufacturers to help make his dream become reality.

The grandfather-of-four said: “I first thought of the process around 30 years ago but it’s only in the last four years I’ve had time to devote to the idea.

“In the early stages a few experts told me the process wouldn’t work so I built the prototype out of transparent material to prove that it would.

“I’ve now shown that it can work and with the technology in place I’m looking for somebody to help push things on.

“There’s no doubt in my mind this process could help save millions of lives.” 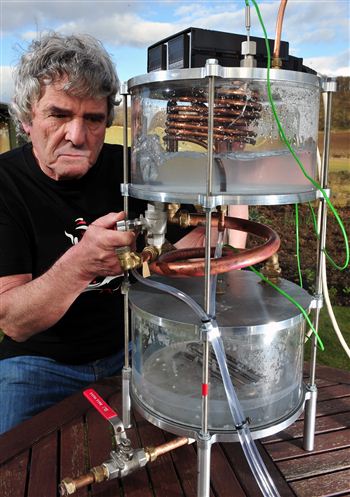 Sven, a retired industrial moisture specialist, has been working closely with experts from universities in Glasgow, Edinburgh and St Andrews and now needs a manufacturer to become involved.

His de-salination process attracted the interest of businessman Jim McColl, 55, who is one of Scotland’s richest men, with his stake in Clyde Blowers valued at £350m.

But Mr McColl has been forced to put his interest aside for at least a year due to existing business commitments.

Sven, who is originally from Sweden, said: “It’s great having someone like Mr McColl interested as it gives me even greater confidence in what I’m doing.

“Hopefully he can find the time in the future to help in some capacity.”

Sven hopes his unique process will attract government interest, so he has written to First Minister Alex Salmond and Prime Minister Gordon Brown.

He is convinced the desalination process he has invented will help the world’s poorest populations and in time revive their countries wealth and stimulate their economies out of recession.