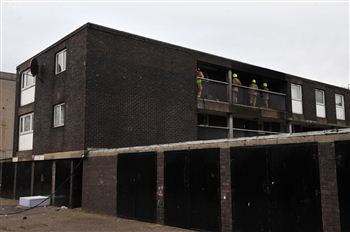 POLICE are hunting an arsonist after a house was deliberately set on fire in the early hours of Friday morning.

The fire broke out around 7am at a block of flats in Coatfield Lane, Leith in Edinburgh after “an accelerant” was used to fuel the flames.

Police attended the scene and helped the Fire Service secure the area by placing a cordon around the block.

A 34-year-old male and a 25-year-old female were treated at the scene for smoke inhalation, but both refused hospital treatment.

The fire is being treated as suspicious and police are now appealing for anyone who was in the area at the time and witnessed anything suspicious to come forward.

Neighbour Andy Thomson, 27, said: “We heard all the commotion just after seven this morning.

“We looked outside and the couple were already out the house coughing and spluttering.

“I saw them being helped by the ambulance crew but they both looked fine.

“They’ve only been in the house a few months and it’s the first time anything like this has happened around here in a while.”

A police spokesman said: “Fortunately there was no one injured during this incident, nevertheless, we are treating this extremely seriously.

“If anyone has information that can assist with our enquiries, we ask that they contact police immediately.”