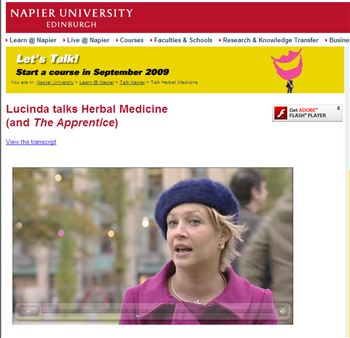 THE NEW-AGE Scot who was famously fired on TV’s The Apprentice has landed a new job at a Scottish university.

Lucinda Ledgerwood – the harp-playing, aromatherapy enthusiast – has been signed up by Edinburgh’s Napier University in a bid to boost recruitment.

The dippy, beret-wearing semi-finalist impressed tycoon Sir Alan Sugar, but was eventually shown the door from the television show after failing to “fit in with Sir Alan’s business”.

And the reality star has hit back at her time on the programme claiming she was bullied by the other contestants.

Ledgerwood, 32, says she now feels at home at the university and is looking forward to becoming its celebrity ambassador.

She is fronting a publicity campaign in which she claims she was attracted to the Edinburgh institution because of its easy-going, non-judgemental atmosphere.

The former risk manager is studying for a BSc in Herbal Medicine and insists Napier is a world away from the “bullying” she received in the TV boardroom.

Lucinda has posted a video message on the university’s website and on Youtube to promote her role.

She said: “I was fired from The Apprentice for being too zany and not necessarily fitting in with Sir Alan’s business.

“I’ve found that Napier is non-discriminatory. It takes each individual as they are and encourages and embraces people of all walks of life, ages and abilities.

“I really do feel that Napier has supported me in my studies and has enabled me to do distance learning throughout.”

The mature student was mocked mercilessly by her fellow contestants for her colourful fashion sense, and has spoken previously about how badly she was treated on the reality show.

She said: “I would certainly say that I was targeted by the other candidates. My accent wasn’t liked and what I wore wasn’t liked and on occasions it was verging on bullying. I was pleased to go.”

A Napier University spokeswoman said that the TV star’s video diary had already proved a big success with prospective students.

She said: “We were delighted that Lucinda agreed to participate and the number of visits to that section of our website certainly seems to indicate that the video clip is of interest to potential students.”

Lucinda has worked for Radio London and appeared in the BBC charity hairdressing show Celebrity Scissorhands since she was ousted from The Apprentice.

She moved to Edinburgh four years ago, and plans to remain in the city after she graduates.