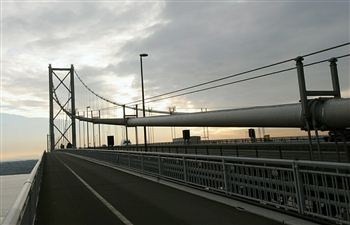 FORTH Road Bridge bosses are turning to a new high-tech option in trying to stop would-be Spidermen climbing the world-famous structure.

Officials are considering whether to install modern laser beam equipment in a bid to beat the idiots who put their lives at risk by scaling the bridge’s cables.

In a world first, the bridge could be guarded by infra-red beams which would trigger an alarm if anyone attempted to scale it.

The proposed security measures come just weeks after 22 year-old Ross Wilson was jailed for seven months for his drunken ascent which forced the closure of the bridge for over an hour.

The lout had clambered up the bridge’s thick cabling and managed to reach the top before being coaxed back down by alarmed bridge staff.

It is at least the third time in the last four years that someone had attempted to climb the 330ft bridge.

Officials from the Forth Estuary Transport Authority (FETA) have admitted it would be practically impossible to stop would-be climber – but the laser system would alert security staff much quicker to the possible dangers.

Barry Colford, chief engineer and bridgemaster, said: “We could install it at the end of the cable, and, if the beam was broken, it would send an alarm.

“We are looking at the cost, but such incidents take up considerable amount of staff time.

“Bridges throughout the world have this issue, but no-one else has introduced this technology.”

Unlike the popular Hollywood depiction of laser technology, the infrared security measures would be invisible to the human eye, and their path cannot be detected by using sprays or thermal imaging cameras.

A spokesperson for Geoquip, which supplies infrared security for prisons, said the beams could cover up to 500ft and would be positioned just ten inches apart – too narrow for someone to slip through unnoticed.

However, Neil Greig, the director of policy and research for the Institute of Advanced Motorists’ Motoring Trust, said: “Relying on technology might not be the best option because you would still have people climbing the cable, as some will be very determined.”

A FETA spokesperson admitted yesterday that the proposed infra-red security measures are just a number of options bridge bosses are discussing.

Ross Wilson was handed a seven month jail term at Dunfermline Sheriff Court last month after his drunken antics forced the closure of the bridge for over an hour.

The Edinburgh plumber avoided certain death after he scaled ice-covered cables and faced howling winds during his ascent.