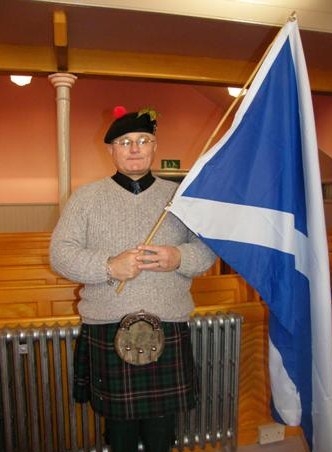 A PATRIOTIC Scot has been banned from flying the Saltire in his own back garden.

James Blair, 54, from New Aberdour, Aberdeenshire, wanted to nail the 7ft flag and pole to his garden fence.

But barmy council bosses are demanding cash from the former Royal Navy hero to get planning consent for his flag.

The nationalist even asked permission from his English neighbour to erect the standard and has been stunned to learn he will have to fork out £145 to go ahead.

He said: “I’ve wanted to put a Saltire in my garden for a while now because I’ve seen a few people in the area doing it and it looks really good.

“I didn’t want to cause offence so I went through all the usual procedures like asking my neighbours if they minded, and also getting in touch with the council just to let them know my plans.

“Incredibly, the council has written back demanding £145 from me and it is my English neighbours that were totally delighted with my plans.

“It just seems crazy to me, it’s not as if the flag pole is 20ft high.

“So, at the moment I’m stuck in a bit of limbo.

“The council is acting as if I want to rip up the roads around here. I’m just baffled by their awkward stance.”

Council officials have informed Mr Blair he will also have to receive permission from bodies such as BT and Scottish Hydro Electric if he wants to plant his flag.

Maureen Watt, MSP for North East Scotland, said: “I find it incredible that Aberdeenshire Council is choosing to place these kinds of obstacles in the way of somebody that wants to fly the flag during this year of Homecoming.

“First we had Lib Dem and Tory councillors in Aberdeenshire refusing to fly the Saltire from empty flagpoles this year and now this. It really seems as if some people are completely refusing to get into the spirit of Homecoming 2009.

“We should be encouraging people to celebrate Scottish culture as we welcome people from all over the world to Scotland, not penalising them for their initiative.

“I hope that common sense will prevail here, and Mr Blair will be able to fly his Saltire without the council penalising him for doing so.”

The ex-Navy serviceman had hoped to fly the flag in his garden and says he would have no problem if his neighbours decided to do the same.

He said: “I had the courtesy to ask my really friendly English neighbours if they minded, and of course they didn’t. In fact, it wouldn’t bother me in the slightest if they put up a St George’s flag in their garden.”

Aberdeenshire Council has told Mr Blair the £145 fee is non-negotiable and that he must pay it before planning permission is granted.

A spokesperson for Aberdeenshire Council said: “The consequences of allowing anyone to do anything they like in terms of development are obvious.

“The erection of flagpoles can be quite complex and we follow national legislation in that regard.

“There are some instances where flagpoles need planning permission, depending on their height, though the Saltire itself would not require permission.

“Our planning service will happily offer advice on what requires permission if there is any doubt.”