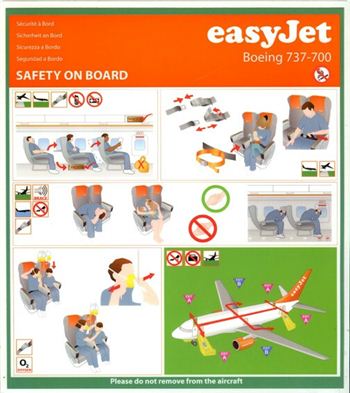 MILE-high money-makers are flying for free by stealing and selling in-flight safety cards on eBay.

The sky-high scammers sneak the safety cards out of planes before selling them for up to £15 each on the internet – a fiver more than the cheapest flight out of Scotland.

But airlines warned that pinching safety equipment could be dangerous.

They compared the thefts to a 1990s craze which saw clubbers stealing seatbelts and lifejackets from flights to Ibiza to wear on the dancefloors.

Now Easyjet have added an extra line to their pre-flight briefing script, pleading with passengers not to take the cards home.

One Glasgow-based eBay seller said he didn’t see the harm in “taking what you pay for.”

He said: “I happen to fly a lot through my work, so it’s just something I thought of doing while on a long-haul flight.

“I thought, we Brits are used to seeing these cards, but there must be collectors of these things abroad.

“It’s the same entrepreneurial spirit that the cheap airlines are founded on, so I don’t see any problem in taking what you pay for.

“I’ve found a very niche market of buyers who return almost every day to see if I’ve got anything new.

“My boss doesn’t know I’m making money out of flights he pays for, but in this day and age you have to grab whatever freebees you can.”

One safety card is currently listed for sale at £15, which is enough to purchase a flight to Amsterdam from Glasgow – and still have a few Euros to spare on the local delights.

Easyjet spokesman Andrew McConnell said that as well as being told how to inflate a lifejacket, fliers will now be asked not to walk off the plane with extra mementos from the flight.

He said: “When cleaning the planes between flights we sometimes find that people have taken the cards as collector’s items for some strange reason.

“So we have introduced a new line to the script when staff are announcing the safety precautions on-board.

“It’s not an epidemic problem but it is very important that all passengers know the safety procedures.

“It’s a bit like in the early 1990s when our planes’ seatbelts were in high demand from clubbers going to Ibiza.

“They were also taking lifejackets and wearing them in the clubs.

“We have spares on board if that trend returns, but we encourage people to think about the consequences of stealing safety equipment.

“If for any reason we don’t have enough safety cards on board, we would ensure those passengers are briefed on the safety precautions.”