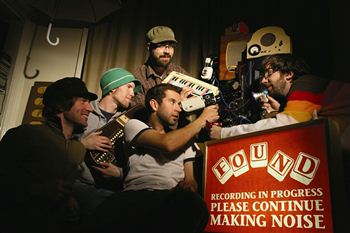 A SCOTS pop group has vowed to make stars such as Chris Martin and Brandon Flowers a thing of the past – by replacing them with robots.

Found – an experimental, avant-garde art collective from Edinburgh – reckon their invention could be the next step in the evolution of pop music.

The five-piece claim their ultimate aim is to replace bands like Coldplay and The Killers with the Cybraphon.

And the brainbox band has now employed a science boffin to come up with the technology that will allow the Cybraphon to ‘read’ music reviews over the internet.

Professor Simon Kirby from Edinburgh University has been brought on board to develop the band’s idea and hopefully bring it to fruition.

If successful the Cybraphon will go on display for a month during the Edinburgh Festival.

Frontman Ziggy Campbell said: “Our ultimate aim is to replace bands like Coldplay and The Killers with machines.

“Our prototype was inspired by old player-pianos and music boxes.

“But what makes Cybraphon different is that it will be affected by reviews of its performances in the same way a real band would be by getting good or bad press.”

“We’re hoping to have the prototype built by August, and once that’s done we’re hoping we’ll get interest from the major record companies.

“The big advantage is that, unlike Chris Martin, the Cybraphon doesn’t need to be paid record royalties.

“But hopefully we’ll make sure any spare cash gets paid into our bank accounts – we’re sick of being broke.”

The arty group has now posted a video of the band’s creation on Youtube.

Formed after meeting at art college in Aberdeen, the band and soon began working on art installations and making music together.

And since then they have collaborated on many weird and sometimes wonderful projects.

Each project the band is involved in is given a catalogue number and is documented on their website.

And in 2006 the group took part in the inaugural BBC Electric Proms with the multi-media comedians (nobleandsilver).

The clever musicians are now all set to join fellow Scots Franz Ferdinand, Primal Scream and The Proclaimers at the annual South By South West Festival in Austin, Texas, next month.

And the skint band has come up with a novel way of financing their stateside trip – they are asking fans to pay anything from £2.50 to £49 to download their new album, Snarebrained.

Band member Tommy Perman said: “The offer has really taken us by surprise. We didn’t really expect fans of the band to contribute £49 for the Snarebrained album, but we’ve had about ten people pay that amount.

“We’re really overwhelmed with all the donations and we promise to keep in touch with everyone who has given cash so they can track our progress in the States.

Ziggy added: “The proceeds will help us pay for flights, beers, steaks and maybe some Mexican hookers.”

Found are due to release their new EP on Fence Records next month.