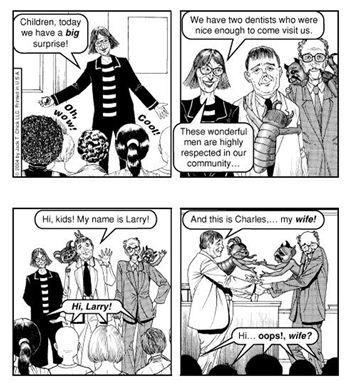 FURIOUS Scots have blasted an evangelical group for distributing a booklet to encourage hatred towards homosexuals.

The cartoon-strip leaflet, entitled Birds and Bees, is being handed out in cafes, churches and youth clubs in Dunfermline, Fife.

It features two gay characters called Larry and Charles who are introduced to a class full of schoolkids and are depicted throughout with demons crawling over them.

And in it homosexuals are compared to the people of the kingdoms of Sodom and Gomorrah – cities that were destroyed by God for their inhabitant’s sins.

The chairman of a Fife-based gay support group has condemned the anonymously distributed booklet as “abhorrent”.

And a local councillor has joined the condemnation by claiming the cartoon book is “encouraging a form of hatred in the community”.

It is being handed out by a group calling themselves the American Evangelist Christian Company, and there are thought to be around 10,000 copies of the publication in circulation in and around the Fife town.

Throughout the cartoon storyline – which is obviously designed to attract children’s interest – the two homosexual characters are demonized for their lifestyle.

The schoolkids in the cartoon strip are told by a Christian classmate that “God hates homosexuality” and warns us in the Bible to stay away from it.

In the cartoon strip, the homosexual characters are accused of brainwashing the schoolchildren about their gay lifestyle.

One little boy is chastised by his teacher for using the word “queer” while one school girl regales her classmates of Sodom and Gomorrah.

The children are then told that they will be “saved” if they follow the Bible’s teachings and the school girl is quoted as saying: “Satan wants to destroy us kids. But God still says being gay is an abomination.

“If anyone tries to make you gay – stay away from them.” 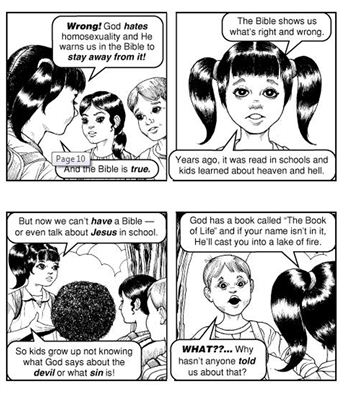 He said: “People aren’t born hateful of other people – they are taught that. And this is a clear example of a group trying to teach small children to hate other people. I think that’s abhorrent.

“I think people pit Christianity against ordinary gay people’s values and that’s wrong. Many people are members of both communities.

“It’s certainly not healthy for children to get such a distorted unbalanced view. I look in the mirror and I don’t see a wee devil sitting at the top of my head.

“So while we can ignore a leaflet like this as irrelevant it needs to be known that this is not mainstream thinking by enlightened reasonable people.”

Councillor Liz Mogg, a former headteacher believes the offensive cartoon strip is encouraging hatred towards the local homosexual community, and believes children should be protected from reading the booklet.

She said: “I imagine any headteacher who would look at that would put it in the bim immediately.

“It’s only encouraging a form of hatred in the community.

“It’s important to prevent this getting to children in the 11-14 age group – a lot of them might not be sure of their own sexuality let alone anything else, and to have this sort of thing thrown at them makes things worse,”

“Bullies will find any reason to make someone else’s life a misery just by calling tham a name, whether it’s warranted or not.

“I think children have quite enough to deal with without the fear of eternal damnation and brimstone.”

The definition of a hate crime adopted by the Association of Chief Police Officers in Scotland is “any crime where the perpetrators prejudice against any identifiable group of people is a factor in determining who is victimised”.

A Fife police spokesperson said: “We received no complaints about this matter and can therefore make no further comment.”