Babe saves his own bacon 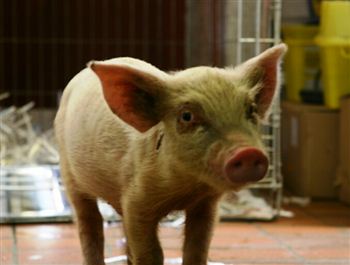 A PIGLET destined for the slaughterhouse has saved his own bacon after being found by a local farmer following almost a week on the run.

Babe was discovered in a field just outside Edinburgh by a farmer last week and is now being nursed back to health.

Scottish SPCA workers who are caring for the six-week-old porker say because of his breed his most likely destiny was the dinner plate.

But after his bid for freedom, which has left the young swine thin and exhausted, it is hoped a farmer or freeholder will take him as a pet.

The piglet was found by a farmer at the Whitehill Mains Farm near the Fort Kinnaird retail park, just south of Edinburgh.

He was named Babe by an ambulance driver who took him to the Scottish SPCA’s animal rescue centre at Balerno, Midlothian, and is now being fed and cared for.

Assistant manager at the centre, Kenny Sharpe, said that he was probably on his way to a slaughterhouse.

He said: “Babe is a large white industry standard breed of pig and has had his tail docked, which are both signs that he was destined for the meat trade.

“The piglet was quite unwell when he arrived with us. He was dirty, thin and weak so we think he may have been straying for four or five days at least.”

And, Kenny said, the sudden appearance of Babe miles from the nearest abattoir in Selkirk in the Scottish Borders has left animal workers stumped.

He said: “It’s a bit of a mystery how Babe came to be found, but we have had incidents in the past where pigs have fallen off livestock transporters and are found at the roadside so that could explain what has happened here.

“There is a railway line close to the farm so he may even have come by train.”

And now carers at Balerno are keen to see Babe re-homed with a loving, and possibly vegetarian, family.

Kenny said: “We cleaned him up and have been giving him antibiotics on a daily basis. He’s feeding and drinking okay, but we are monitoring his progress for now.”

“If he makes a full recovery we will be looking for home for him as a pet. Ideally it will be someone with a bit of land, such as a small holding or petting farm, and a secure, pig-proof compound as we know he is already good at escaping!”

Anyone interested in re-homing an animal or wishing to donate to or join the Scottish SPCA can visit scottishspca.org or telephone 03000 999 999.