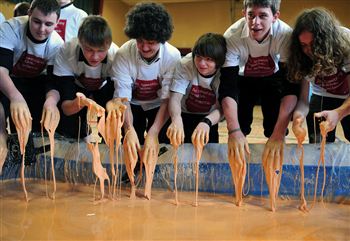 AN EXPERIMENT using an inflatable pool filled with enough custard to make 875 trifles has been used to show science has many uses.

A Scottish Government campaign has been launched in a bid to show young people that science is “not just for geeks”.

The drive aims to challenge misconceptions about the subject – after recent research showed many young people believe science is “dull” and “geeky”.

The messy experiment saw pupils from Trinity Academy in Edinburgh run across a pool of custard without sinking.

About 40 students took turns to skip, dance and jump on the dessert-filled pool in order to demonstrate the ‘non-Newtonian nature of custard’.

Fiona Hyslop, secretary for education, said: “As these pupils are demonstrating, science is not all about lab coats and pipettes.

“It’s about finding out how life works and how we can make it better.

“That’s what we want Scotland’s young people to realise.”

And Trinity Academy science teacher Philip Wilson said enthusiasm for science at the school is more than evident.

He said: “Our science classes are full up with keen pupils.

“It’s very important to get kids engaged in science. We really want to show them the releveant and contemporary nature of the subject.

“Studying science can lead on to a variety of careers, for example, sports medicine or fashion design.”

Employment research has shown that 58 per cent of science graduates are in full-time employment just six months after completing their degrees.

And results from the Work and Hours Survey showed the best-paid science professionals can earn an average of £72,515 per year.

Professor Anne Glover, the Scottish Government’s chief scientific adviser, said: “Science has the power to open up so many career paths for our young people.

“This campaign challenges the misconceptions around science and shows the huge creative opportunities that a science-based career can provide.

“It will stimulate debate and encourage our young people to find out more about the science in their everyday lives, much of which has been shaped by pioneering developments in Scotland.”