Scots stunna in bid to be High St Honey 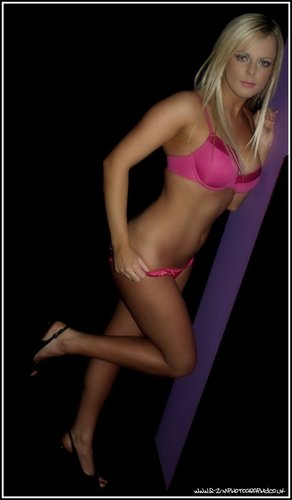 A SEXY Scots nurse has beaten off stiff competition from thousands of wannabe models to make the top ten in FHM’s hottest High Street Honeys.

Kirsty McDaid, 23, polled thousands of votes to become one of only three Scottish finalists in the popular lad’s mag’s competition.

Kirsty, who works at Queen Margaret Hospital in Dunfermline, stands to win a cool ten grand and a chance to become a cover star of the saucy magazine if she wins the coveted title.

The gorgeous phlebotomist from Lochgelly, Fife, is “delighted” to have made the final and is hoping to “make her home town proud of her”.

She said: “I can’t really believe I’ve made the top ten. I’m just so grateful to everyone who voted for me in the last round.

“The whole town really got behind me because I said I wanted to put Lochgelly on the map.

“I’m just the girl-next-door, really down to earth, but if I win that’s what I’ll try and do.”

The stunning blonde mum-of-one was entered into the sexy competition by a close friend who wanted to surprise her.

Kirsty said: “I would never have had the guts to enter myself, but when my friend heard about the High Street Honeys they sent off some pictures of me.

“Hopefully, I can now go all the way.”

And the Scots stunner has revealed she is so popular at the hospital where she works that some of the admiring doctors have taken to putting her image on their phones.

She said: “Yes. It’s true some of the doctors have put my photo on their phone, but it’s all just a bit of fun. I’m quite flattered by all the attention really.