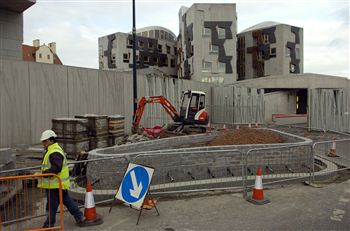 SCOTTISH Parliament bosses have been slammed for spending £223,000 of taxpayer’s money to install a new high tech anti-terrorist device – a roundabout.

The triangular roundabout is being built outside the entrance to the Holyrood car park in a bid to stop wannabe terrorists from crashing into the building.

And a further £250,000 is to be spent on a new system of traffic lights and pop-up barriers to control entrance to the underground car park.

Worried officials are building the one-metre high concrete roundabout as a chicane – forcing vehicles to slow down and squeeze into the car park.

A parliament source said: “The idea is to make it impossible for someone to drive down Holyrood Road at high speed and crash the gates.

“The function of the chicane is to put an obstacle in front of the building.”

But bewildered politicians have questioned the necessity for spending money on extra security measures on a building that is yet to have any attack launched against it.

She said: “How many of these kind of incidents have there been?

“If it was a regular occurrence, I would be prepared to take their word for it that this is a necessary precaution.

“But if it’s only a ‘what if’, I think we could find better uses for the money.”

As well as the chicane, two large concrete plinths and up to 14 steel bollards are being installed nearby – also to avert attackers.

But parliament bosses say that the measures are being put in place in response to recommendations from the UK Government’s security agency.

A spokeswoman for the parliament confirmed the work would cost £223,788.

She said: “Following advice from the Centre for the Protection of National Infrastructure on the need to improve perimeter security, the Scottish Parliamentary Corporate Body agreed, among some other measures, to install a chicane.

“Other than to say the work will involved traffic calming measures, there are obvious reasons why we would not expand on this given it involves parliamentary security.”

Land Engineering, the local council’s road maintenance contractor, is carrying out the work and the bill is being picked up by the parliament.

This latest spending spree comes almost a year after a new procedure was installed in the car park to ensure that vehicles didn’t crash on the narrow ramp.

At the time, £263,806 was spent on barriers, traffic lights and a swipe card system in the underground car park.

But less than six months after it was installed it broke down, leaving the lights constantly on red.

Security guards had to stand and wave cars through after checking nothing was coming the other way.

There are also plans to install 162 new bollards along pavements running beside the building.

And 18 rectangular benches are to be built in front of the parliament ponds along with six leaf-shaped benches on the corner of Canongate.