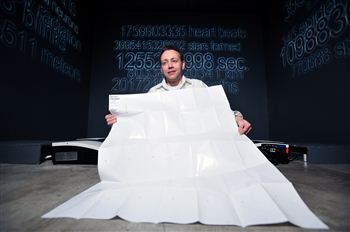 A STUDENT admits he is “wasting” an ocean of paper in the name of art.

His display features random countdowns, including figures predicting the date of his death.

But the minimalist fliers promoting the exhibition are the size of 20 A4 sheets of paper, and only feature writing in the top corner.

When confronted over the fliers, Hewitt, 29, tried to justify their use by saying the blank space was “interesting” and helped raise awareness of environmental waste. 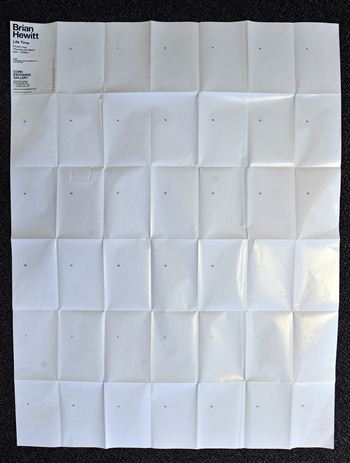 He said: “While I admit I have mixed feelings about the fliers, they are for impact. I know I’m not the world’s most green person but I do what I can. Luckily it is recycled paper, but yes, it is a lot of paper, I concede that.

“From a divine point of view, I think it’s interesting to notice that if you give somebody a sheet of paper and it’s full of ink, they usually don’t have a problem with it.

“But if it’s full of white, somehow it’s seen as a waste. I can see why people might see the promotional stuff that way.”

Hewitt’s show opens today at the captial’s Corn Exchange gallery and predicts that he will die on 30 December, 2043.

His calculations are all based on the span of his life, from birth to the present millisecond, with numbers projected on three walls, constantly calculated and updated as every second passes.

He displays his total heart beats, breaths, blinks, complete skin replacements and the total amount of radiation he’s been exposed to.

The numbers are lengthy, including the number of seconds he has left to live – 1,098,835,280 at midday on March 5 – , but he says when it’s your own life counting down, those seconds are precious.

Despite admitting the promotional fliers could be seen as a waste, he insists part of the aim of the show is to raise environmental awareness.

He added: “I came on a bike today. I am environmentally conscious. I did environmental journalism for a number of years actually and it’s hard to even read the newspapers on a daily basis and not be alarmed by everything you see.

“I think the environment is a hugely important issue, not just because trees are nice and animals are nice or whatever but because this is our legacy for our children.”

Of the countdown to his death, Hewitt also admits to being “morbidly fascinated” with death.

He said: “Obviously the number that everybody grabs onto is the date of my death.

Maybe it’s a morbid thing to do but that for me is just one of many numbers in there.

“The work is about putting human life into scale and context, not just that I have some kind of morbid fascination with mortality.

“The whole thing is about how small and precious human life is in general compared to the vast number of stars in the universe and the shrinking number of species out there.

“For me it’s important to understand my place in the world by looking at these things.”

Hewitt, who originates from Chicago, recently won an international scholarship to complete a Masters of Fine Art degree at Edinburgh College of Art.