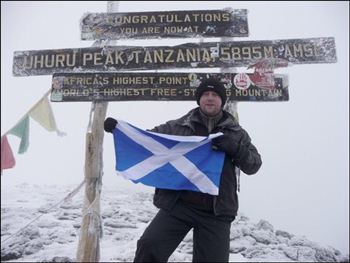 A SUPER-FIT Scot who collapsed on the football pitch five years ago with a rare heart condition has battled his way back to full fitness to climb Africa’s highest mountain all in the name of charity.

Scott Fleming, 31, from Armadale, West Lothian, has been in two comas, flat-lined an amazing seven times and had to overcome two life-threatening illnesses as he slipped closer to death.

Scott preceded the current crop of celebs trying to climb Kilimanjaro for Comic Relief, and raised thousands of pounds for charity as he scaled the 19,330ft peak,

His strenuous efforts on the arduous trek were his way of showing the world he is back to full health.

The design technician is now hoping to complete bagging all of Scotland’s 284 Munros over the next few years and has already made plans about embarking on his next dangerous charity expedition.

Scott first fell ill in December 2004 when he collapsed on the football pitch while playing in a local amateur match.

Paramedics rushed to the scene and battled to save Scott’s life after the midfielder suddenly fell into a coma while out on the pitch.

Scott was rushed to hospital where he underwent a lifesaving operation. 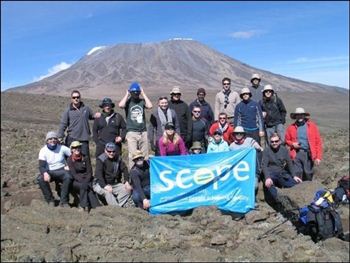 Incredibly, just a couple of months later as Scott was still recuperating at home he was struck down with another serious health problem.

The staunch Celtic supporter had had a tube placed down his throat after the heart operation but the inside of his throat was damaged and became infected.

Scott’s throat then started to close up and he was forced to have a tracheotomy which resulted in him losing his voice for over a year.

He then had to endure another dangerous operation to stretch his windpipe back into its proper shape.

Scott was then placed in a coma for the next five days so the medical team could carry out check-ups and make sure his throat was healing properly.

He said: “When I was ill and had my heart operation, I had a tube down my throat and as a result of that the inside of my throat got scratched, became infected and my throat began to close over.

“I had to have a tracheotomy which meant I lost my voice for 14 months, and then they operated to stretch my windpipe back into shape.

“I was in a coma for five days after that so they could do check-ups and make sure it was healing properly.”

But in just a few years, Scott has forced his way back to full fitness, and is using his newfound strength to raise thousands of pounds for charity.

Scott travelled out to Tanzania in February to attempt the climb of a lifetime, and was delighted to be one of only seven people out of the original 25-strong team to complete the challenge.

The Armadale man’s efforts raised over £3200 for the cerebral palsy charity Scope.

He said: “I am now 100 per cent healthy and I thought, since I’d fancied doing the Kilimanjaro climb before I became ill, it would be a good way for me to prove to myself and everybody else that I’m fully fit again.

“It took us four-and-a-half days to get to the top and only seven of us made it all the way up.

“A lot of people were badly affected by the altitude, but I was lucky enough that I was ok and reached the top.

“I even managed to phone my fiancée Sarah about half way up the mountain to tell her everything was alright.

“It was all an amazing experience.”

And Scott says he is giving serious thought to his next fundraising challenge.

“I’d like to do another challenge in the future,” he said.

“I’ve got the travel bug now and knowing that you’re doing something that’s helping someone else is definitely a bonus.”