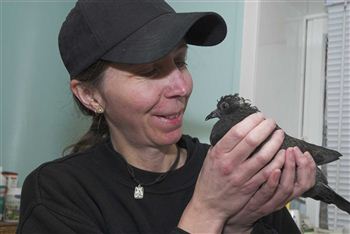 CALLOUS thugs have come up with a new meaning for the term ‘pigeon post’.

A poor pigeon has been nicknamed Tombraider after being found posted through a letterbox of a shop that sells headstones.

The injured bird was found by an assistant as she opened up the Stirling-based shop on Wednesday morning.

The Scottish SPCA has slammed the culprits claiming the stress could have killed the defenceless animal.

The shocked worker pulled open the large metal shutters to find the battered and bruised bird cowering in a corner.

Unable to fly and suffering from a large gash to his head, the pigeon was finally captured and taken away by the Scottish SPCA.

And staff at the charity’s Wildlife Rescue Centre in Dunfermline have now dubbed the recuperating pigeon Tombraider.

Colin Seddon, the centre’s manager, said: “We can only assume that someone put him through the letter box because he was discovered between the main door and the internal shutters and it’s very unlikely that he could have flown in there.”

“He has a gash to his head, probably caused by being shoved through a very small space.

“It may have been done as a prank, but the stress alone could have killed him.

“He’ll stay with us for a day or two and then we’ll release him.” 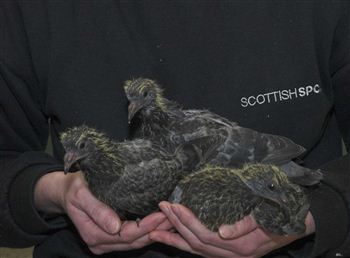 Meanwhile, the Fife centre has been inundated with around 25 baby pigeons this week.

The young squabs are being hand-reared by the animal welfare charity after being found in various precarious situations across the east of Scotland.

One survived a cat attack, others were abandoned by their parents weak and hungry and some were simply found lying on the pavement, likely to have fallen from nests on buildings.

Colin Seddon added: “It’s quite unusual to get so many at the one time, but hopefully most will make a full recovery and be released in around a month’s time.

“They are initially fed a special liquid diet and then they progress on to being hand fed tiny balls of an egg food mixture until they begin to feed themselves.

“Hopefully most will make a full recovery and be released in around a month’s time.

“Some people view pigeons as pests and would argue that we shouldn’t treat them.

“However, they are a wild bird like all the others we treat here so we don’t turn them away when they are brought to us.”

Anyone with information about the cruel prank in Stirling is being urged to contact their local Scottish SPCA office.

Linlithgow in lock-down for Chanel show