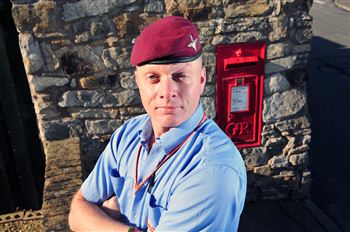 A HERO postie who was injured while serving his country in Afghanistan has been nominated for a Royal Mail bravery award.

Iain McDonald, 38, was on tour with his TA unit in the Helman province last year when he was hit by flying shrapnel from a rocket-propelled grenade.

The brave postal worker brushed off his injury by refusing to fly home and was back in the front line within ten days of being wounded.

Now, Iain is all set to be honoured by his employers after his manager nominated the heroic soldier for the Royal Mail’s 1st Class People Awards.

Iain, from Burntisland, Fife, was posted out to the troubled war zone with fellow members of A Company – 4th Paras in May last year.

It was the fearless sergeant’s second dangerous tour with his TA unit after also serving in Iraq in 2003.

And, while on duty on the Helman front line as a Guard Commander, Sgt MacDonald and five regular soldiers were attacked with rocket propelled grenades.

His wound was thought to be so severe he was quickly transferred by helicopter to the medical centre at Camp Bastion where army doctors considered surgery.

But because of the close proximity of the metal to Iain’s major organs the medical team decided it best to leave the shrapnel embedded in the soldier’s chest.

After ten days recuperating from the attack Iain was then flown back to the front line to complete his tour of duty. 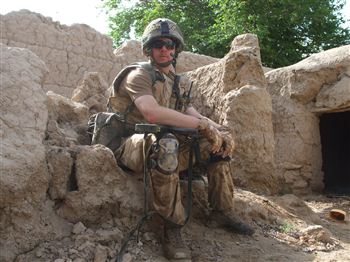 He said: “It really is a privilege to be nominated for the bravery award – it is not something I was expecting at all.

“My unit was sent to Iraq in 2003, but we didn’t really have that much to do as the main conflicts had already been won.

“But it was different story last year when we travelled out to Helman province in Afghanistan. We all knew beforehand how dangerous it would be, but we were well-trained and ready for any eventualities.

“I knew instantly I had been struck but I was more worried about my colleagues who were more seriously injured than me. At the time I didn’t realise it was shrapnel, I thought I’d actually been shot.

“It was incredibly painful, but the adrenalin pulled me through.”

Iain was ferried to the medical centre at the nearby Camp Bastion where doctors patched him up and within ten days he was back facing the Taliban on the front line.

The brave squaddie said: “I had no hesitation in heading back out there. Afterall, all my mates were still there and they needed all the help they could get.

“It’s a very dangerous place, but to be honest, I feel I was only doing my job and I did what anyone else in my position would have.”

The courageous Fifer is proud to be nominated for the prestigious bravery award, if not a little embarrassed.

He said: “I feel that if I’m to be rewarded for my service then every other soldier out there should also be recognised. It’s not all about me, far from it, and I was only doing what I was trained to do.

“But that said, the kids have already got the winner’s money spent and it looks like we’re off to Florida or the Caribbean for our holidays this year.”

Ian McKay, the Royal Mail’s Director of Scottish Affairs, said: “I’m really pleased to congratulate Iain on being shortlisted for this award.

“His actions demonstrate exactly why our postmen and women are such highly valued members of their local communities.

”Our people make daily deliveries to all 2.5 million addresses in Scotland and this makes them more visible on the streets than policemen.

“They are often first at the scene in cases of fire, road accidents and robbery, and instinctively get involved.” 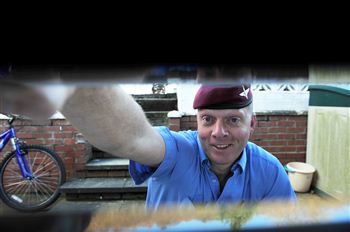 Iain is up for the Scottish Bravery category and if he wins will receive a £500 cheque and a trophy.