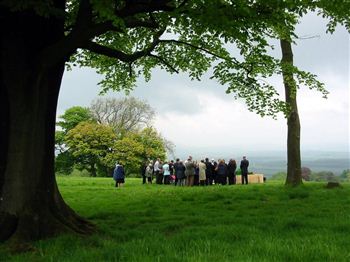 MORE people than ever are dying to try out new eco-friendly bamboo coffins.

Eastenders star Wendy Richard was given an environmentally friendly send-off earlier this week, signalling how popular a ‘green’ funeral has become.

In light of her bamboo coffin, funeral directors and land-owners are now cashing in on the trend, saying that traditional religious ceremonies are dying out.

New age coffins are known as ‘eco pods’ and can even be made out of papier mache, while woodland burials are growing in demand too.

Natural burial plots are popping up all over Scotland, where traditional solid wood coffins are banned and religion is rarely involved.

Three of Scotland’s most popular natural burial grounds are owned by James Leedam, director of Native Woodland, who even has a plot in the Cairngorm National Park.

He convinced the Forbes clan in Aberdeen to donate large parts of their estate to natural woodland burials, where people have requested to be buried near ancient stone circles and trees.

He said: “Wendy Richard’s funeral was the most high profile bamboo coffin we’ve seen and there is a genuine feeling that the industry is growing thanks to such a high profile funeral.

“I believe that people will see that on television and in the newspapers and want to do the same.

“More people than ever care about the environment and not only do they want a biodegradable coffin, but they want their loved ones to come to an inspiring place to remember them, not a regimental busy cemetery.

“We don’t allow coffins which aren’t made of natural products, so we encourage coffins to be handmade with locally-sourced wicker, bamboo, reclaimed pine or timber, even papier mache eco pods.”

Eco coffins are far cheaper than standard solid wood versions which can cost up to £2,500.

A cardboard coffin costs just £350, a bamboo one similar to Wendy Richard’s will set you back £420 and a willow version is around £900.

The late Eastender’s star’s funeral on Monday came in the same week that one of Edinburgh’s biggest cemeteries, Mortonhall, began accepting certain types of new-age coffins.

Mark Porteous, a funeral director in the capital has been in the business for 20 years and has seen a big rise in the number of people requesting something other than the traditional coffin.

He said: “Up to 40 percent of people now want something alternative compared with five years ago when it was only about one in ten.”