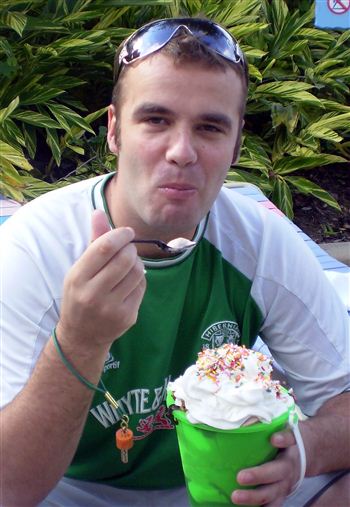 POLICE have stepped the hunt for the killer of Edinburgh man Martyn Barclay by searching a municipal dump for the murder weapon.

Officers sealed off the amenity site, just off Old Dalkeith Road, early yesterday (Wed) morning and were seen combing the large area for clues to the slaying of the young father.

Barclay, 26, was shot in the head just yards from his front door around 6am on January 17.

He passed away in hospital the following day.

A murder team of around 40 officers has made little headway over the last six weeks in the hunt for the gunman.

The murder weapon is still missing and no descriptions have been issued yet of any suspects.

Searches of sewers in the area were ordered by detectives investigating a theory that a gunman may have disposed of the weapon.

And yesterday police continued their hunt by closing off the large dump which is just yards from the street where Barclay was gunned down.

Up to 50 officers, some using sniffer dogs, were spotted searching through tons of rubbish in the search for any evidence relating to the shooting.

A sign at the entrance to the site warned the public it was closed to due to a police incident.

Barclay’s girlfriend Caroline Igoe, 31, needed hospital treatment days after the shooting following a suspected overdose, and in the following weeks also tried to hang herself.

After the killing, detectives spent up to 14 hours interviewing the mum-of-four, her parents Margaret and Joseph, and sister Bonnie and brother Paul.

The couple had only been together for around seven weeks.

Sources say Barclay, who had a two-year-old son Michael, worked for a major dealer supplying cocaine and heroin in east Edinburgh.

Police interviewed private hire car drivers in the wake of rumours that Mr Barclay was killed as part of a bitter feud between drug gangs from the Gilmerton and Granton areas of the capital.

And just three days before Barclay was killed, his best friend James Docherty was jailed for 140 days for stealing a vehicle while a toddler was sitting in the back.

Barclay had a string of previous convictions for assault, theft and road traffic offences and had appeared in court dozens of times.

A Lothian and Borders Police spokesman said: “Police are today carrying out searches in the Inch area of Edinburgh, as part of the ongoing investigation into the murder of Martyn Barclay in Hazelwood Grove, Edinburgh on Saturday January 17.”

Former addict reveals he turned his life around after waking up from overdose after £1,000 binge