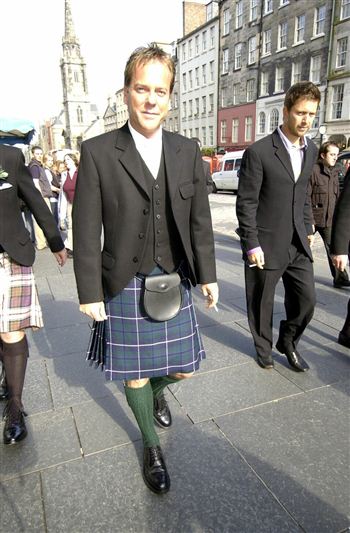 THE genealogy craze got a huge boost yesterday with the unveiling of Scotland’s census from 1881.

It means the likes of Hollywood starlet Reese Witherspoon, who wants to retrace hers, superstar actor Kiefer Sutherland, who is fiercely proud of his and American president Barack Obama, whose mum has Celtic ancestors, can all research their Scottish roots in more detail than ever.

The previously unseen records include fascinating insights into the lives of many famous Scots including the legendary Peter Pan playwright JM Barrie and James Keir Hardie, founder of Scottish Labour Party.

And it’s hoped that many of the A-list celebrities flying the flag for Scotland will see the year of Homecoming as the perfect opportunity to come back to walk in the footsteps of their ancestors in 2009.

The census charts the lives of the 3.7 million Scots living in Scotland on the night of April 3, 1881, when William Gladstone was Prime Minister of Great Britain, a treaty was signed ending the first Boer War, penicillin inventor Alexander Fleming was born in Ayrshire and Queens Park triumphed over Dumbarton in the Scottish Cup Final.

Genealogy experts hope he new census records will enable family historians to more easily trace their Scottish roots, while the digitised versions of the original documents can also provide a keepsake of their ancestors’ lives.

“Having access to images of the records as well as the transcribed data enhances the genealogy experience for family historians and helps connect today’s generations with the past.”

One of the most high-profile figures to claim roots in the Scots Diaspora is Republican senator, John McCain.

During the presidential election he even claimed he was directly descended from Robert the Bruce, but his boasting of Scottish blood has never been proven.

According to genealogists, there are estimated to be anywhere between 25 and 80 million people worldwide who can lay claim to having Scottish roots.

In the six years since the 1901 Scottish census records were put online in 2002, around 714,000 people from around the world have signed up as registered users in order to try and delve deeper into their family trees.

Many come from overseas to Scotland to trace their lineage, and Stuart Reid, who runs Edinburgh-based genealogy firm Scottish Roots, says that comes down to a desire to feel connected to an ancestral homeland.

He said: “I suspect there are people in relatively ‘new’ countries like the USA, Canada and Australia who feel the need to have some historical links with what they see as a ‘homeland’.

“Because there is a well-documented history of European migration to these countries, the obvious ethnic groups to look for heritage are the ones who moved there en-masse, such as the Irish, Scots and Italians.

“Many of these people want to discover things such as where their ancestors lived and will go as far as trying to research where their great grandfathers worked in the late 1800s or coming to Scotland to see if their ancestral homes still exist.

“For them, it’s a desire to find a missing piece of the jigsaw about their family history.

“They are fiercely proud and interested in their Scottish roots, rather than being intrigued by the idea of tartans and clans.”