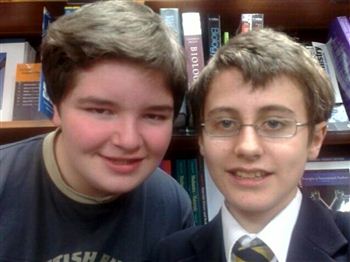 Two tech-savvy Scots teens have come up with a new social blogging platform that could help turn them into online millionaires.

Scott Campbell and Nathan Adam, both 13, from Aberdeen, decided to launch the ScotBlog.net website after they spotted a gap in the market.

The site is one of the first to be dedicated to specifically blogging about all things Scottish, and the pair hope to cash in on this year’s Homecoming extravanganza and entice the tartan diaspora to join in the fun.

The clever youngsters have created a site which allows users to create blogs, upload photos and keep in touch with friends.

And the two entrepreneurs have already attracted a raft of sponsors to their site and have been recording around 1000 hits per day.

Scott said: “It was around August last year we saw that there could be some merit to this idea. We wanted to set up a site that would interest people around the world and hoped they would sign up to blog their thoughts on being Scottish.

“We’ve already got some ex-pats from Canada, the US and Australia writing for us, so hopefully, once word gets out, many more will join up.

“Everyone we’ve spoken to thinks it’s a great idea and our parents, friends and teachers have all been so supportive.

“Users can add pictures and videos like most social networking sites, but we hope we’ve found a niche in the market.

“It’s just been a great experience so far and who knows what it could lead to.”

The two boys are keen bloggers themselves and admit they hope to become journalists when they leave school.