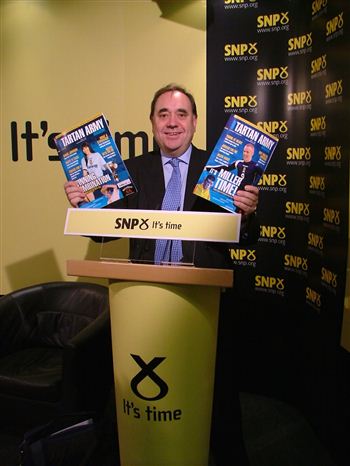 FIRST MINISTER Alex Salmond has accused his beloved Hearts of striking a “devil’s bargain” with its controversial owner Vladimir Romanov.

The lifelong Hearts supporter claims the club is in “unsafe hands” after succumbing to the “Chelsea syndrome”.

And the politician has riled the Hearts loyal support by comparing Romanov to the late former chairman Wallace Mercer – who famously tried to merge the club with bitter rivals Hibernian in the 1990’s.

But the club’s supporters have rounded on the First Minister’s contentious remarks claiming he is rarely seen at the Tynecastle ground.

In a recent interview, Salmond admitted he would welcome a return to the old-fashioned stewardship of the club.

He said: “I still believe there is a general problem in football which involves a kind of devil’s bargain.

“If you get a club sold to a very rich foreign guy – often a Russian oligarch or somebody like that – then I suppose you enter into a devil’s bargain, whereby you hope the guy is rich enough to buy you success.

But, George Foulkes, a Labour MSP and ex-chairman of the Edinburgh club, questioned Salmond’s right to interfere in the club’s affairs saying he rarely saw him at any of the club’s matches.

He said: “He doesn’t know what the financial situation at Hearts was like when Romanov came in.

“He would be better employed solving the many problems which Scotland is facing without pontificating on a club that he knows nothing about.”

He said: “Mr Romanov has at least provided a measure of financial resource for the club.

“There is no doubting his commitment. Tynecastle Stadium would have been leveled and houses built on the site with Mr Romanov’s intervention.”

He said: “Vladimir Romanov, for me, is a kind of Baltic states Wallace Mercer – he is unsafe hands.

“I’m not saying that Romanov is some sort of dreadful person. All I’m saying is that, if we’re going to be taken over by a rich guy from the Baltic states, then it’s just a pity he wasn’t a bit richer.”

Romanov recently made a bid to become Lithuania’s new President, but was knocked back after the country’s Chief Election Commission decided to deny the Hearts owner the chance to run as a candidate – because he was born in Russia.