A SEX-CRAZED squaddie who burst into a single mum’s home before indecently assaulting her will be thrown out the army after he was jailed.

The terrified 36-year-old was subjected to an hour-long ordeal before she managed to force Grant Cartwright out of her home. 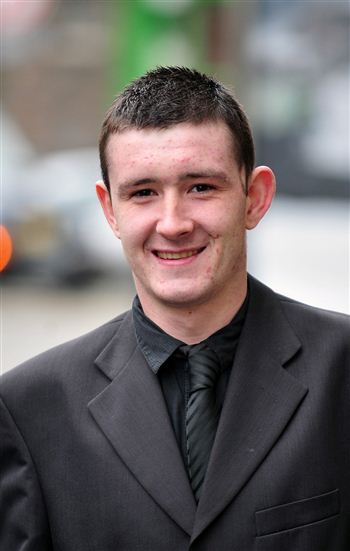 Cartwright, 19, threw his victim on her own bed before straddling her while trying to rip her clothes off as her two children slept just feet away.

The Royal Scottish Border soldier had turned up at the woman’s Edinburgh home in the early hours after a night downing lager and Jack Daniels with mates.

At Edinburgh Sheriff Court Cartwright was jailed for 18 months after he was earlier found guilty of indecent assault by a jury.

Sheriff Kathrine Mackie said the attack had had a “devastating effect” on the mother-of-two and also placed Cartwright on the sex-offenders register for 10 years.

The court had earlier heard how the teenager had turned up at the woman’s flat demanding to speak to his friend.

When his victim – who cannot be named for legal reasons – went to fetch a mobile phone to call the man Cartwright was looking for, the brute barged into her home behind her.

He followed her into the flat before grabbing her and throwing her onto her own bed.

Cartwright – who has served in Iraq – then straddled his victim, pinning her down and trying to rip her clothes off before groping her.

The brave mum managed to fight him off but was left with bruises to her arms and thighs as well as scratches on her hands from the struggle.

A duvet in the room was later found to be torn as a result of the violent struggle.

Cartwright – who was stationed at Dreghorn Barracks – eventually left the home but was spotted by his victim’s 11-year-old son and heard shouting by her 14-year-old daughter.

He returned home while the woman called a friend and two days later reported the May 12, 2007 incident to police officers.

Police interviewed Cartwright in July that year but he denied even being at the flat on that date.

He claimed he could not remember any altercation between himself and the woman, instead referring to her as “huge” and a “minger”.

But after forcing the two children to come to court and give evidence, Cartwright was found guilty by a majority jury of an indecent assault.

They also unanimously convicted him of a breach of the peace after a three-day trial last month.

Cartwright’s solicitor, Robert Fraser, said his client was a “popular” soldier who had been tipped to go far.

Mr Fraser said: “He is regarded as an excellent soldier who is likely to be promoted.

“This is a young man who has a future and a career ahead of him. If a custodial sentence is imposed it will have a devastating impact on him.”

He added that army officials had told him that if Cartwright was jailed he would be automatically discharged from the armed force.

But Sheriff Mackie said the serious nature of the attack meant Cartwright had to go to jail.

Sentencing, she said: “The offence which you were found guilty of is of such gravity that a custodial sentence must be considered.

“It was clear by the evidence I heard that this attack had a devastating effect on the victim.

“I’m not persuaded that such mitigating factors such as your position in the army are of such significance that you should not be given a custodial sentence.”