A LONG-HAUL lorry driver who was caught with a stun-gun for the second time has been spared a jail sentence. 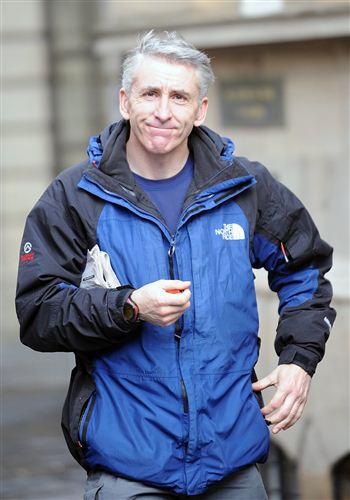 Anthony McCrindle, 44, said he had bought the taser to protect himself from gangs and illegal immigrants while on jobs in continental Europe.

Police found him snoozing in his car in Musselburgh, East Lothian, last February following a round trip to Switzerland.

After realising McCrindle had a previous conviction for possession of a similar device they questioned him and he told them he had a stun-gun and where it was.

The self-employed trucker said tasers were commonly used by lorry drivers and that he would rather carry one of the non-lethal weapons than a knife.

At Edinburgh Sheriff Court McCrindle was fined after a sheriff accepted he was not a danger to the public.

The court had earlier heard how McCrindle, who has held an HGV licence for over 20 years, had pulled over to rest as he made his way home to Edinburgh.

Fiscal depute John Kirk said: “The officers were suspicious as to what was going on and spoke with McCrindle.

“The officers checked his details and on finding out about the last conviction he was asked directly if he had anything in the car he should not.

“He advised the officers that he did indeed have something that he should not and indicated where the device could be found. It turned out to be a battery powered electronic stun-gun.

“He stated to the officers that he had purchased it in Switzerland for 69 Euros.”

McCrindle later admitted a breach of firearms laws at Edinburgh Sheriff Court but again insisted the weapons were common for self defence and that they were safer than a knife.

He said: “Would you rather be stabbed or hit by a taser?

“You’re sleeping in a truck in the middle of nowhere; people open the back doors to put illegal immigrants in your truck.

“If you have a gang of seven or eight people there, who is going to win?

“I pretty much guarantee you if you stop a foreign driver they a taser or they will have CS gas, it’s pretty common.”

Following background reports his solicitor Alexander Lafferty said McCrindle was a single man who had an “unusual lifestyle”.

Mr Lafferty said: “He is a loner and lives in his car between shifts.”

But, Mr Lafferty insisted, his client was not a danger to the public and should not be jailed.

Sheriff James Scott agreed but added that another conviction would probably see McCrindle given a custodial sentence.

He said: “This is a very unusual case, I accept the assessment of Mr Lafferty and you do not appear to me to be a danger to the public.

“However this is a serious offence and you have a previous conviction.

“If you com before the court again for this sort of offence it will be very difficult to keep you out of prison again.”

After the hearing McCrindle said he would return to continental Europe if work was available but declined to comment on the case.