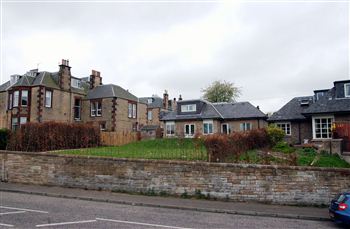 FORMER telly favourite John Leslie has splashed out half a million pounds to get rid of his next door neighbour – after she complained about his plans for a roof terrace.

The shamed star’s plans to convert an Edinburgh old folk’s home into four luxury flats complete with roof terrace were met with anger by his neighbours when details of the conversion were announced.

Leslie, 44, wanted to include the stylish roof terrace within the property, but neighbours quickly moved to kill off those plans due to concerns over privacy.

The most vociferous complainer was 63 year-old Esther Hey who lived in the bungalow next door to Leslie’s £2.5 million property.

She claimed the proposed balcony would have views directly into her bedroom.

But, now it has been revealed Leslie splashed out £495,000 last April to buy Ms Hey’s three-bedroomed bungalow.

The move could now lead to the 6ft 5” Hibs supporter to re-apply to Edinburgh Council in a bid to have the roof terrace installed.

Ms Hey, who also originally sold the Georgian mansion to Leslie, has now taken an estimated £1.75 million from the disgraced television presenter.

After selling the large former-nursing home to Leslie in 2006, Ms Hey moved into the small bungalow next door.

Leslie splashed out £1.25 million on the Edinburgh mansion in December 2006, and applied for planning permission to convert it into four luxury apartments.

However, the controversial application caused outrage amongst his concerned neighbours who claimed it was a potential death trap.

They said there would be an overspill of cars onto the main road, just yards from an already notorious accident black spot.

At the time one neighbour said: “I have spoken to a lot of people in the area and we all agree it is a reckless application.

“With the overspill of cars parked directly on the corner, the street will become very congested and even more of a death trap, especially in winter.”

An official complaint was lodged with Edinburgh City Council in March 2007.

The application again hit controversy in May 2007 when Leslie was forced to shelve plans for the balcony and enlarged windows which would have overlooked a series of houses and back gardens, including Ms Hey’s.

After being forced to abandon the plans for the large roof terrace, Leslie’s application was eventually approved by Edinburgh City Council in June 2007.

The renovation of the former-nursing home is now complete and Leslie has slapped an £2.5 million asking price on the property.

But his latest big money buy now leaves questions over what he plans to do next with the development.

The eight-bedroomed house in Edinburgh’s upmarket Morningside area went on the market two weeks ago.

ESPC business analyst David Marshall said: “There is no part of the market which is unaffected or has been exempt from what has been happening.

“But the types of people bidding for this property are less likely to be affected.

“I would not suspect many potential buyers would be considering a 100 per cent mortgage on this kind of property.

“There are still buyers out there and my suspicion would be they would not be affected as severely as others by the current situation.”

The ex-Wheel of Fortune star has transformed the former-nursing home into a state-of-the-art family home.

It boasts stunning views of the Edinburgh skyline including the Castle, Salisbury Craggs and the Braid Hills.

Leslie turned to property development after his TV career hit the rocks in 2002 amid sex charges which were eventually dropped.

And more recently, Leslie upgraded an Edinburgh house for his parents and has also put another property next door up for sale.