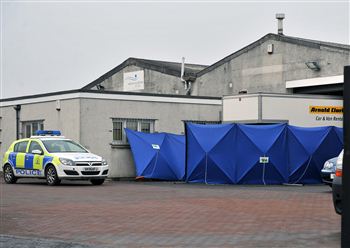 HUNDREDS of thousand of pounds worth of cannabis plants continue to be removed from a warehouse in West Lothian after firefighters stumbled on a massive drug farm.

A Lothian and Borders fire crew were called to an industrial estate in Whitburn last Friday over reports of smoke coming from one of the units.

The call turned out to be a false alarm caused by steam coming from a nearby building but police also attended and during their investigations a haul of over 1,000 plants was found.

Officers have spent the weekend emptying the facility and were still present yesterday (Tuesday) and say it may take a total of up to a week to clear the site.

The indoor farm is divided into two areas with “considerable” electrical equipment aiding their growth.

It is thought the haul will take until Thursday to shift – almost a whole week after the find with the majority of the plants will be destroyed, while some are being kept as evidence.

As yet no arrests have been made and police are appealing for information.

A Lothian and Borders spokesman said: “Police responded to reports of a fire at an industrial estate in Whitburn, West Lothian at around 9.30pm on Friday, March 19.

“During their investigation officers uncovered a cannabis cultivation unit containing a significant number of plants and cultivation apparatus.

“Enquiries are ongoing to locate the individuals responsible for growing this cannabis and are appealing for anyone with information to contact police immediately.

“The recovery of these plants is further testament to the zero tolerance approach Lothian and Borders Police take towards drug related activity and those who look to profit from the misery of others within a community.”