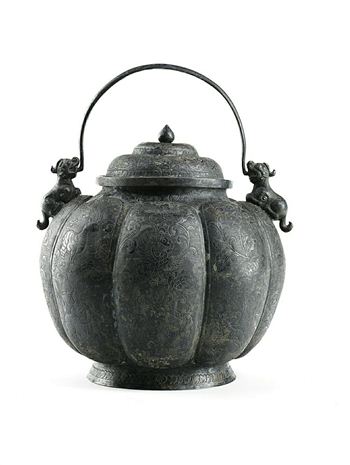 A LUCKY Scots bargain hunter is in line for a massive payout after discovering a rare Chinese vase in a box filled with bric-a-brac.

The Tang vase has been estimated at around £120,000 and goes up for auction next month.

The lucky punter from the Borders found the extremely rare 9th century vase in an old cardboard box at a house sale five years ago.

And it is thought the owner shelled out less than £100 for the vase.

The vase shaped like a melon is decorated with scrolling leaves, flowers, birds and animals.

The owner, who wishes to remain anonymous, said “When I first saw the vase I thought that it was something remarkable and I am thrilled that it has been valued so highly.

Anna Westin, Asian Specialist at Lyon & Turnbull, said “The Tang dynasty is often referred to as China’s Golden Age, a period of peace, great creativity and prosperity due to extensive trade.

“These treasures were used often at court and were also given as gifts to important dignitaries.

“Silver of the Tang dynasty is rare, and most pieces of this type can be found in museum collections around the world.

“In particular, decorated lidded vessels of this type are very scarce – a notable gilded comparison, one of China’s national treasures, is in the Shaanxi History Museum.”

As the popularity for gold and silver in China grew, workshops opened all over the vast country culminating in a flourish of some of the finest silver and gold works of art in the country’s history.

The vase will be sold on April the 8th 2009 at Lyon & Turnbull’s Sale at Blenheim Palace.