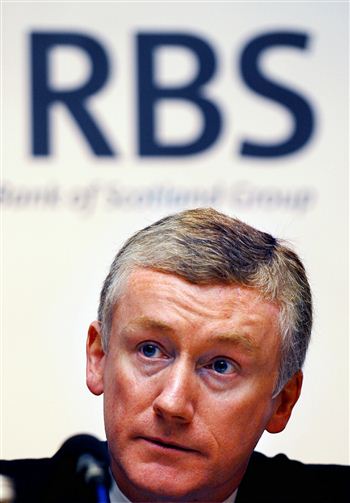 The under-fire Goodwin walked off with a massive £16m pension, but RBS is still insuring his seven cars under an employee scheme.

And the bank is even putting together a deal to slice off £1000 of Goodwin’s £6000 premium renewal – but has yet to formalise the deal.

Sir Fred, 50, who was forced to resign last October after overseeing the largest banking loss in corporate history, has accumulated two Ferrari’s, a Mercedes, a Range Rover Vogue, a Rover 45, a Jaguar S-Type, and his pride and joy, a Triumph Stag.

A bank insider said: “Can you think of anything more irritating than this man getting a whopping discount.

“It is amazing no-one thought it might be inappropriate to offer him a better deal when he is in dispute with the government which effectively now owns the firm.

“He presided over disaster at RBS – they should tell him to find another insurer.”

Under Sir Fred’s leadership RBS lost an amazing £24.1 billion and was only rescued after a bailout by the taxpayer.

RBS, who owns insurance companies Direct Line, Churchill and Privilege, may offer to insure the fleet of cars collectively instead of individually.

Vince Cable, the Lib-Dem Treasury spokesman, said the insurance policy was “one of many loose ends left over from his days of extravagance”.

He said: “People will be shocked that, after dragging down the bank, he is getting such treatment.”

But RBS have insisted: “The premium Sir Fred Goodwin pays for his insurance does not include any staff discount.”

Sir Fred is also under-fire for spending a fortune on expensive wallpaper and carpets during his time as head of the bank.

Wallpaper costing £1000 per roll was allegedly used to decorate the lobby outside Sir Fred’s office after a small stain was spotted on one wall.

And it has also been claimed two huge RBS boardrooms were re-carpeted twice, at a cost of £100 per square yard, because Sir Fred did not like the colour.

Other allegations recently leveled against the beleaguered banker include splashing out £100,000-a-month on part-time chauffeurs and having fruit specially flown in from Paris.

And it has also been revealed that the reviled banking boss has just opened an account at a private bank reserved for the super-rich.

Prestigious bank Adam & Company, which is based in Edinburgh’s exclusive Charlotte Square, claims to deliver a personal service to clients with “complex financial affairs”.

The exclusive bank, who have offices in Edinburgh, London and Guernsey, were bought over by RBS in 1993, but operate as a private bank with RBS as the parent company.