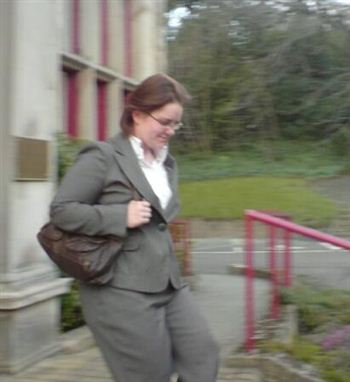 A SCOTS teacher caught romping with one of her former pupils has been struck from the teaching register.

Angela Dunning, 31, was said to have enjoyed a steamy clinch with schoolboy Scott Farrer, then only 17.

She was branded “disgraceful and dishonourable” by the teaching bosses who have banned her from teaching.

The saucy Miss was employed as an English teacher at Braeview Academy in Dundee when the tryst was uncovered in June 2007.

Dunning and the boy were at an end of term party thrown by another teacher from the school when the relationship began.

Both Dunning and the boy have always denied anything sexual happened that night, but yesterday Dunning was banned from teaching after appearing in front a GTC panel.

At the time of the incident, a report was sent to the procurator fiscal but the authorities decided not to proceed with criminal charges.

It is believed the complaint made to the GTC came from the local authority who ran the school.

Ms Dunning did attend the private hearing yesterday but declined to comment as she left the building.

However her legal representative Gina Wilson said: “Angela Dunning stands by the fact she did not have sexual intercourse with the man in question who at the time of the alleged incident was a former pupil of the school.

“And she intends to appeal the judgement.”

On striking Miss Dunning from the register, the GTC panel said: “The disciplinary sub-committee found that the charge was proved and that Ms Dunning was guilty of relevant misconduct.

“The sub-committee considered the conduct fell within the definition of being disgraceful and dishonourable in the eyes of competent teaching colleagues of good repute.

“The sub-committee are directed that her name should be removed from the register.”