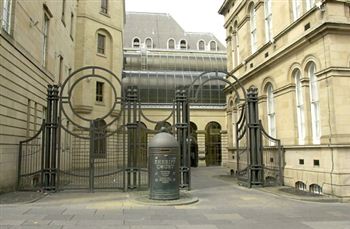 A BOGUS teenage travel agent who sold fake holidays on eBay has had his time behind bars extended.

He was just 19 years old when he started his scam and managed to con £8,129 out of holiday makers before his negative feedback alerted people.

Hudson, who worked the scheme from an internet café in Edinburgh, was tracked down after giving his “customers” his email and bank details so they could pay him.

The only child claims he was “overprotected” during a sheltered up-bringing and turned to crime when he ran into financial problems after moving away from home.

But at Edinburgh Sheriff Court he was sentenced to 14 months in custody after he earlier admitted 12 charges of fraud.

Hudson also admitted dodging a court appearance over the con – he was only brought to justice after being jailed in Leeds for similar offences last year.

The court had earlier heard how Hudson, now 25, worked from an internet café in Edinburgh’s Leith Walk and made the hefty sum during 2003 and 2004.

But he was convicted of similar offences in Leeds Magistrate Court and his lawyer, Duncan Hughes, said Hudson got in touch because he wanted to resolve all his matters before his release date in September this year.

Mr Hughes said: “He hasn’t had much difficulty in his life. He lived in a sheltered environment with his parents and is a reasonably intelligent man.

“Things seem to have gone wrong for him when he left home and perhaps he was overprotected.”

Mr Hughes said Hudson turned to a “ham-fisted” fraud after living beyond his means, despite support from his family.

He added: “It was inevitable he would be caught.”

Sheriff Alistair Noble sentenced Hudson to 11 months in prison for the fraud charges with a further three months for failing to appear.

The sentences will run back to back and only begin after his sentence in England is at an end.