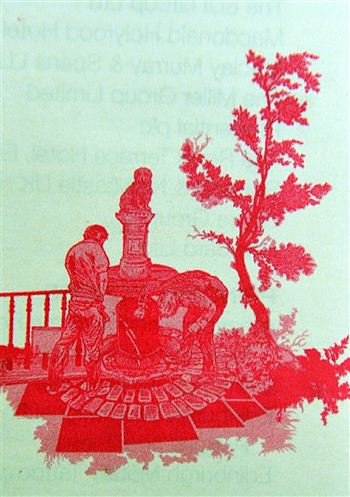 EDINBURGH International Festival organisers have come under fire after unveiling their new programme – which features neds urinating and vomiting on the iconic statue of Greyfriars Bobby.

Unruly baseball cap wearing youths drinking lager at the Scottish Parliament building, and filthy street beggars huddled under the sculpture of one of the city’s favourite sons, David Hume, are also depicted in the publication.

The controversial images adorn the front cover of the world famous festival’s new programme, which began a worldwide distribution of 450,000 copies yesterday.

And the cityscapes, which are also to be widely reproduced on Festival bags, adverts and taxis seems to have split public opinion.

Scottish politicians have come together and slammed festival bosses for “setting out to destroy the reputation of our capital city”.

But Rebus author Ian Rankin has backed the the campaign believing it has come up trumps with promoting the main theme of the Enlightenment.

Glasgow design firm Timorous Beasties were commissioned by the EIF to come up with a striking image for the cover of their new publication.

And their images of hooligans, vagrants and the city’s infamous tramworks have also provoked a furious tirade from notable Edinburgh figures. 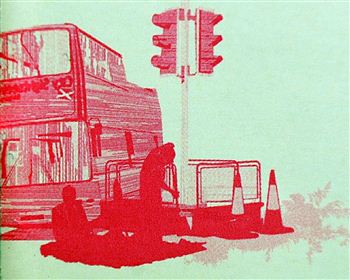 David McLetchie, Tory MSP for Edinburgh Pentlands, said: “This is a Glasgow agency setting out to destroy the reputation of our capital city.

“This is an appalling advertisement for Edinburgh, not just our international festival. With friends like these, who needs enemies?”

And Lothians MSP, Margo MacDonald added: “All these things are about first impressions, it’s about capturing a mood – you want to generate excitement and interest.

“People will undoubtedly take a second look at this, but then they will just move on and see what is going on in the Manchester International Festival instead.”

But, award-winning author Ian Rankin said: “Timorous Beastie, the artists behind the cover, are ‘weel kent’ and I think they have done a great job of flagging up the main theme of the Festival – namely, the Enlightenment.

“Are we really any more civilised than our ancestors?  How have times changed since the Enlightenment?

“What problems do we face in contemporary Scotland?  They give us the opportunity to discuss these issues and we should be grateful to them.”

And, EIF director Jonathan Mills has also defended the festival’s decision to use the contentious images.

He said: “I hope you will understand the symbolism of this toile that it weaves a very special kind of menace and magic throughout the programme.”

Timorous Beasties are no strangers to controversy after a producing a Glasgow toile that showed drug addicts and prostitutes on Glasgow’s streets.

A statue of David Hume is featured with a traffic cone on its head, with a homeless man and woman sleeping at its base.

A Festival spokeswoman called the design “an unflinching view of a contemporary city, and that’s entirely appropriate for the EIF to have commissioned a response to the Enlightenment. It’s very respectful as well as the city’s heritage”.