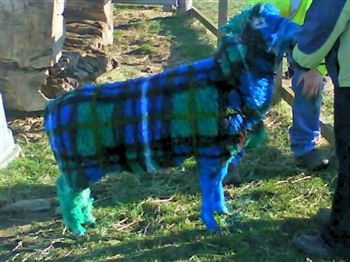 A SCOTS animal farm has come up with a novel way to celebrate next week’s Tartan Week – by unveiling the country’s first ever tartan sheep.

As people throughout the world celebrate all things Scottish, a piper will lead the flock of the tartan sheep around the popular East Links Family Park attraction.

Grant said: “I was asked by the local council to get involved in Tartan Week last year and I was delighted to participate again this year.

“The sheep are a great attraction for the public and are the talking point of the area.

“I’ve been in touch with the local vets and they are fine with it all because we use non-toxic paints.”

He joked: “I’ve been telling all the kids that come to the farm that I have connections with the Clan McHaver and I’ve managed to get a few of these rare sheep sent down from the Highlands.

“We’ve got six sheep and nine lambs – which, of course, the kids just love.

“I tell them the lambs are actually born a light shade of blue and don’t become fully tartan until they are around one year old.

“Their tartan wool is prized by kilt-makers all over the world, and the whereabouts of the Highland glens where the clan McHaver – who have bred and tended the flocks of tartan sheep for centuries – is a closely guarded secret.

“It’s a fun day out for all the family.”

Each day at 11am, from April 6-13, the piper will lead the unusual flock around the farm, near to Dunbar.

The tartan sheep are just one of a number of attractions organised to celebrate Tartan Week, with many of the region’s pipe bands parading through their towns.

And in Athelstaneford – home of the Saltire – the Duchess of Hamilton will present a commemorative gift to the pipe major of the Royal Scots Association Pipe Band.

The Scottish Flag Trust is also offering people a chance to own a Saltire that has been flown on Tartan Day in the famous village.

Councillor Paul McLennan, the local authority’s tourism spokesman, said: “Tartan Week is a chance to let our hair down and celebrate some of the more popular aspects of Scottish culture.”