TOURISTS staying at a Scots holiday cottage got the shock of their lives after opening a dishwasher – to find a snake lurking inside.

The visitors were staying at a house in Aberfeldy, Perthshire, when they went to load dishes in the machine only to find the Californian King snake had curled around t pipes turning from a dishwasher to a HISS-washer.

But the cool customers didn’t panic and immediately called in Scottish SPCA officers to come and collect the slithery surprise, nicknamed Ali.

Kenny Sharp, manager of the charity’s Balerno rehoming centre where the snake is being cared for, said that it was in surprisingly clean health.

Curled around the pipes

“It is more than likely that it has gone in there because it is hot, snakes like the heat and will always try to find somewhere to keep warm.

“It looks as though it belongs to somebody as it was very well looked after and in a very good condition. Either it had lived off the local mouse population or only recently escaped.

“We will hold it here for seven days but after then we will try and find a new home for the reptile.”

Ali is just one of many strange and exotic creatures found by unsuspecting people across Scotland.

Only last week Rosemary Dailly in Niddrie found a Rosy Boa in a cupboard under the sink.

She was getting ready to wash her car when she came across the slithery intruder. 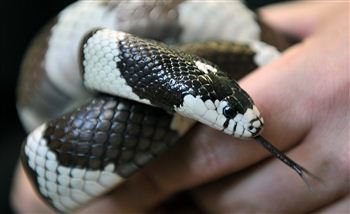 She said: “I started pulling everything I needed out of the cupboard and I saw this thing moving at the back. At first I thought I was imagining things – I couldn’t believe it.

“I would have expected to be more afraid but I just picked it up and put it in a tub with some water. It seemed to like that because I think it was thirsty.

“I hope they find a good home for it because it was absolutely gorgeous. My grandchildren wanted me to keep it but I would have had no idea how to look after it.

“It’s nice to hear it’s called a Rosy Boa, though, because I sometimes get called Rosie too.”

Through the water pipes

The reptile is believed to have travelled through water pipes into Mrs Dailly’s flat, but it is not known for sure.

Kenny’s advice to anyone who finds a reptile in their house it to contain it and call for help.

He said: “Obviously a lot people are quite fearful of reptiles but they will only strike as a last resort and most of the snakes kept as pets are not venomous.”

But hysterical calls about slithery snakes are not uncommon at the Scottish SPCA, as Kenny explained.

He said: “This is a typical situation we are called to on a regular basis. We get calls all the time where people have found snakes in the garden, under the floorboards and other places.

“Often they come from the flat above or below, just escape from their cage and go for a wander.”

The charity are now desperately trying to find homes for the 13 snakes in the centre as they are running out of room.

But they are warning that any future owner will have to know how to look after them properly.

Centre Manager Diane Stewart said, “Our centre specialises in caring for exotics and we have staff who are trained in their feeding and care.

“However, our exotics room is very full at the moment and we are keen to find suitable, experienced homes for these fantastic creatures.

“Anyone looking to rehome a snake or a terrapin will need to have the right knowledge and experience as well as the time and resources to care for them properly.

“Each species has specific requirements, including the need for an appropriately sized vivarium and an environment that is kept at the right temperature and humidity.”

Anyone interested in rehoming an animal or wishing to donate to or join the Scottish SPCA can visit scottishspca.org or telephone 03000 999 999.