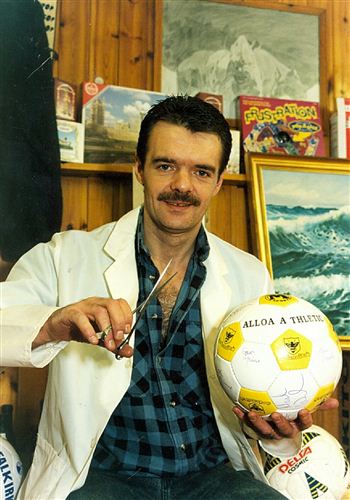 A SCOT who won the accolade of the ‘World’s Fastest Barber’ has died after a short illness.

Sandy Dobbie, 47, shot to fame in 1999 when he smashed the record for the world’s fastest haircut at one minute, 20 seconds.

The demon barber also held the world title for the most haircuts in an hour – an amazing 23 cuts in 59 minutes, 18 seconds.

The Guinness Book of Records has paid tribute to the quick snipper saying Sandy was “a member of the family” and whose passing was “very sad”.

Sandy, from Alloa, Clacks, was also a staunch supporter of various charities and was well known in the area for his wacky stunts to raise cash.

He raised thousands of pounds for local causes over the years, and in one daring endeavour he pulled a truck for over 100 metres in front of a large cheering crowd for Children in Need.

Sandy’s brother, Davie Dobbie, paid tribute to the popular crimper calling him “a one in a million”.

He said: “It was such a shock when I heard of Sandy’s death, it was totally unexpected.

“He’ll be sadly missed in the area as everybody knew him because hew was such a character.

“He was always playing practical jokes on friends and family – and he would do anything for you. He was just that kind of guy.

“Sandy was well known for his charity work, and his fundraising was something he was really proud of.

“And, of course, one of his proudest achievements was when he broke the record for the fastest haircut. You couldn’t keep the smile off his face for about a week.

“He really was one-in-a-million.”

Sandy, who appeared on the Children in Need show in 2002 cutting hair for charity, was also planning a marathon cycle trip to raise cash for under-privileged Scots kids.

Bother Davie also revealed that mourners will be asked to donate to charity after the funeral which is expected to be held next week.

A spokesperson for the Guinness Book of Records said: “We are sad to hear of his death. Sandy did a lot of work for charity.”

Sandy Dobbie passed away on March 17 after suffering a seizure, and leaves behind a wife and two children.