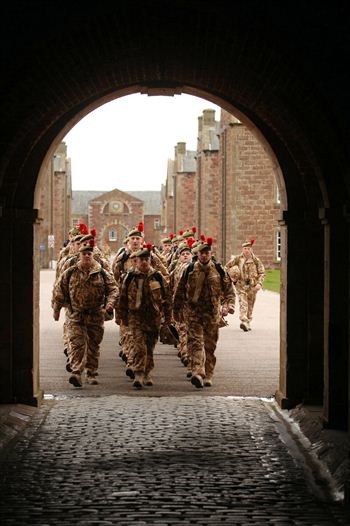 MEMBERS of the Black Watch bid an emotional farewell as they prepared to be shipped out to Afghanistan yesterday.

Around 450 soldiers from the 3rd Battalion The Royal Regiment of Scotland (3 Scots) based in Inverness are on their way to Afghanistan to start a six-month operational tour.

They will be based in Regional Command South’s headquarters in Kandahar and will be responsible for a wide range of duties from fighting the Taliban to winning the hearts and minds in the local Afghan population.

Their patrols will enter territory that hasn’t yet seen NATO forces and it will be a considerable challenge for the soldiers.

Lance Corporal Stuart Edgar is one soldier who knows what it is like to be injured on duty. Six months ago in Kenya he was kicked and thrashed by a bull elephant, but managed to escape serious injury.

He said: “Of course you worry about getting killed or seriously injured. But I tend to worry more about my mates.

“I’ve already been in a situation where I thought I was going to die when that elephant was battering me around. It’s the worst feeling on earth and I don’t want any of my friends to go through that.

“Hopefully the same guardian angel that helped me out in Kenya will be with me in Afghanistan.

“We’ll all look out for each other.”

“A credit to my mum”

Lance Corporal Glen Simpson is more excited than scared about the upcoming tour.

He said: “My stepdad has been a soldier for 19 years and he encourage me to join The Black Watch so I want to be a credit to him and mum. I’ve learned a lot from him and I’m looking forward to the challenge ahead.”

And Glen’s stepdad, Colour Sergeant Glen Pearson, is setting out to Afghanistan too as he is also in The Black Watch.

His new wife Lorna has the two of them to worry about whilst they are away.

Colour Sergeant Pearson said: “She’s really worried about us both and saying goodbye was really tough.

“But I know what she’ll be going through. I will worry about the young lad too. I’ll be on tenterhooks every time he goes out on patrol.”

And the support of family and friends is important to the soldiers as they embark on a unique tour for the battalion.

Commanding Officer Lieutenant Colonel Steven Cartwright said: “I am delighted that the Battalion has been given this opportunity to serve our Nation.

“This will be the first time we have deployed together for a few years and we do so with the firm knowledge of the support of our families and our Regiment.

“This will be a considerable challenge to the Battalion. Our goal is to secure the respect and trust of the Afghan Nationals and we can only do that by providing them with the security that’s badly needed.”

The last time the Black Watch deployed was in 2004 when they were sent to Fallujah, Iraq in a support role for the US – a move that featured in the award-winning play, Black Watch.

Major Robin Lindsay, battalion second in command, said that the soldiers are more than ready to tackle the challenges ahead.

He said: “Instead of the ground-holding operations, providing a security framework in Helmand normally assigned to infantry battalions, we will be used where we are needed.

“We have trained hard for this and we’re taking out a good mixture of Iraq veterans and operational virgins, so we have the rigour of youth tempered by the experience of old hands.

“It would be wrong to say that we don’t get anxious or worried about what lies ahead but the guys are fit, they’ve reached a very high level of technical expertise and they’re equipped with the very latest kit, vehicles and weaponry to maintain superiority.

“As we head out over the next few days, we can be confident that the Black Watch has never been better prepared to deploy on operations than we are now.”

As well as the Black Watch, 30 TA tsoldiers from 52nd Lowland and 51st Highland will be deployed too.