Iain Macdonald, 38, was on tour with his TA unit in the Helmand province last year when he was hit by flying shrapnel during a rocket-propelled grenade attack.

The injured Sergeant brushed off his injury by refusing to fly home and was back in the front line helping his mates within 10 days of the attack – complete with the shrapnel still embedded in his chest.

On his return from the war-zone the postie was then nominated for the Royal Mail’s 1st Class People Awards.

“To have won is fantastic”

And the delivery man has now won the national accolade for bravery at a ceremony in London yesterday – collecting his £1000 prize money from Christine Bleakley and Royal Mail Managing Director Mark Higson.

Thilled Iain said: “I was happy just to have been nominated, but to have won is fantastic.”

Leave the shrapnel inside

After 10-days recuperating from the attack Iain demanded to be flown back to the front line to complete his tour of duty.

He said: “I really enjoy the work I do with the TA and just did what any of my colleagues would have done under the same circumstances. 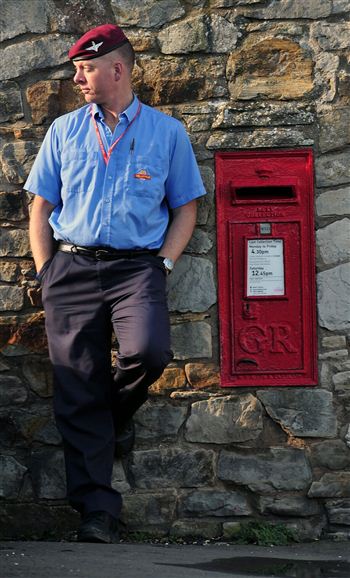 “I knew instantly I had been struck, but I was more worried about my colleagues who were more seriously injured than me.

“At the time I didn’t realise it was shrapnel, I thought I’d actually been shot.

The brave squaddie added: “I had no hesitation in heading back out there.
Afterall, all my mates were still there and they needed all the help they could get.”

He said: “Daily ambushes and intense firefights at close quarters with Taleban insurgents were the daily rhythm of life for Sergeant MacDonald and his fellow paratroopers, and it pushed every man to his limit.

“Iain is approachable, pragmatic, reliable and determined. Sgt Mac gets on with the job.

“I think he displayed that whilst fighting in Afghanistan. Just over a week after being injured, he was back with his comrades.”

Christine Bleakley said: “In the UK our postmen and women are a group of very remarkable people who contribute so much, with acts of kindness, a huge amount of fundraising, and a commitment to volunteering which makes such a difference to the local communities where they live and work.”

And Marilyn Livingstone, Labour MSP for Kirkcaldy, added: “His family, friends and the local community will be proud of the commitment he has shown in the face of adversity.

As winner of the Scottish Bravery category Iain also walked off with a £500 cheque and a trophy.