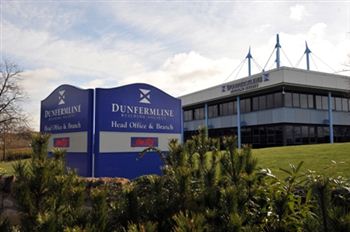 TROUBLED Dunfermline Building Society customers spoke about their shock and anger at the news that the bank is to be taken over by Nationwide yesterday.

The 140-year-old mutual was acquired yesterday after racking up losses of £26 million amid claims that the UK government had not acted fast enough.

Some locals even suggested that the ailing bank was deliberately ignored by the British government in order to undermine calls for Scottish independence.

Loyal customer John McGee said that the Westminster Government was firmly to blame.

Mr McGee, 84, said: “I’ve been a DBS customer for years and I don’t hold the company responsible for what’s happened.

“I trust the people who are in charge.

“It’s Alistair Darling and Gordon Brown, who is my local MP, who are to blame for exaggerating the problem.

“I do think that they are trying to undermine Scottish independence.”

Peter Stirling, 75, also from the town, added: “Dunfermline Building Society is a great institution and this is an absolute scandal.

“I’m sure something could have been done much sooner – why couldn’t the government have stepped in?”

Although happy to see their savings safe, many declared that this was yet another worrying sign of the times.

Local resident Laura Aitken, 22, said: “I am glad that it’s going to stay as the Dunfermline Building Society, but every bank seems to be going down the tubes.

“Hopefully I won’t have to take all my money out just yet.”

Hospital worker Kelly Jane-Connoly said that she was more worried about her savings than the embattled Scottish financial industry.

Kelly, 30, said: “How long is this banking trouble going to go on for?

“I am starting to think that my money isn’t safe anywhere.”

Bernie Hewitt, 54, said although he was glad to see the brand name survive, this was just business as usual.

He said: “This is just business I am afraid, it sounds cruel but it’s true.

“I do not think the Government can afford to bail out every bank that’s in trouble. There’s trouble like this all over the country.”

DNA Testing Continues to Grow in Popularity Due to Affordability

How online banking has revolutionised the way people handle money