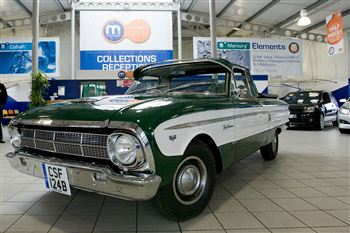 IT HAS taken six months of hard work and thousands of pounds to restore – but at long last the transformation of Scotland’s worst banger is complete.

A rusting right-hand drive 1964 Ford Falcon – complete with bird’s nest in the engine – was last year chosen as the country’s most run down vehicle.

But after hundreds of dedicated hours of hard work from a major car retailer, the classic car has been pimped into a 21st century hi-tech motor.

Owner Stuart Simpson, 58, from Bo’ness, West Lothian was overwhelmed with the transformation when he picked the keys up from competition organisers Motorpoint last week.

The former musician was chosen from hundreds of entries from all over Scotland for the car supermarket’s ‘Pimp My Banger’ contest. 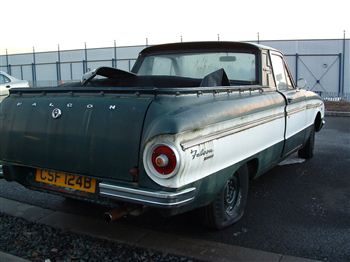 Stuart, who has spent over 30 years collecting vintage vehicles, fell in love with the Ford Falcon after spotting it on the internet and had the car flown over from Australia in the late 1990s.

He said: “I initially bought it for fun, using it to ferry equipment to and from gigs. But it wasn’t that practical as the back axle ratio was too low.

“This meant that while it could climb the side of a ‘hoose’, it struggled to get over 50 mph, which isn’t much fun when you’re on your way back from the Borders.

“Then when I lost my day job at Hewlett-Packard in South Queensferry, and I didn’t have the means to do anything with the car.

“One thing led to another, and before I knew it the Falcon was nothing more than a lump of rust blocking the driveway.

“I can’t believe the job Motorpoint has done transforming my car. It really was Scotland’s biggest banger so I honestly didn’t know what to expect. 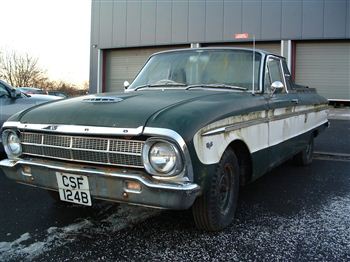 “I half expected them to give me a call and say they couldn’t do it. But the results of their hard work have surpassed anything I could have imagined, and I would like to say a big thank you to everyone at Motorpoint for returning my Ford Falcon to its former glory.”

Motorpoint took six months to transform the Falcon from an ageing rust bucket to its former self.

Stuart now plans to use the pimped up car to help market his new business venture, a micro-brewery in Bo’ness,

And he is of creating a special limited edition beer in the car company’s honour – the Motorpoint Falcon.

The newly-transformed Ford Falcon is also scheduled to make appearances at various beer festivals and classic car rallies around the country this summer.

There is also talk of the souped-up motor becoming an exhibit at a well-known Scottish motor museum.

Graham Provest, General Manager of Motorpoint Glasgow, said: “We’re thrilled with the results. Normally we only get to work on either new or nearly new cars, so when the Ford Falcon arrived we knew we had our work cut out for us.

“Even though it has proved to be a real challenge, pushing the team to their technical limits, we couldn’t be happier with the end product. It looks amazing and I am sure it will turn heads wherever he is delivering his beer in Scotland.” 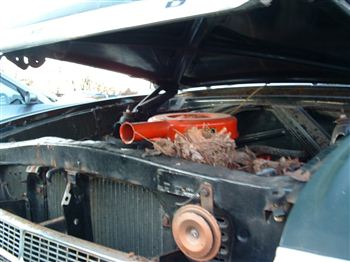