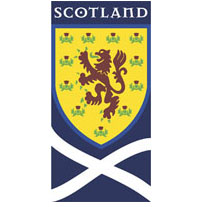 RANGERS and Scotland football stars Barry Ferguson and Alan McGregor have been handed lifetime bans from playing for the national team after a drinking session just three days before a crucial World Cup qualifier.

Ferguson, the Rangers captain, and goalkeeper McGregor were informed by the SFA today (FRI) that their services would no longer be required for the Scottish national team.

An announcement was placed on both the Scottish Football Association’s and Rangers’ websites announcing the governing body’s decision.

Both players have also been suspended by the Glasgow giants following an internal club inquiry into the player’s conduct while on international duty.

The pair have been suspended without pay for two weeks by their club – the strictest sanction available under the guidelines governing player’s conduct.

Ferguson and McGregor were said to have indulged in an eight hour drinking session following the team’s return from Holland last weekend.

Both had played their part in Scotland’s 3-0 defeat to Holland, and were expected to star against Iceland at Hampden Park just four days later.

Following a bust-up with manager George Burley both players were dropped to the bench for the important match.

The SFA statement reads: “Following on from the events of the past week – and specifically the last 48 hours – the Scottish FA has today confirmed that Barry Ferguson and Allan McGregor will no longer be considered for International selection by Scotland.

“The decision was taken following further discussions today between the National Team Manager and the Scottish FA Chief Executive.

“This action has been taken in the best interests of the squad, the fans and the country.

“Everyone is determined to qualify for the World Cup and we must ensure that nothing is allowed to distract us from this goal.”

Rangers have agreed with the players that part of their deducted wages will be donated to charity.