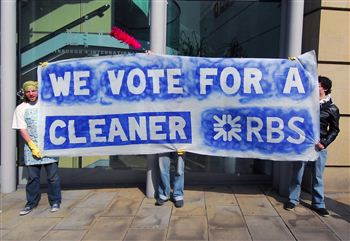 UNDER-FIRE RBS bosses faced a barrage criticism from angry shareholders as they voted overwhelmingly against the bank’s pay and pension’s policy at the company’s AGM yesterday.

During the meeting Hampton revealed former-chairman Sir Fred Goodwin’s contract is being “looked at to see if it is indeed watertight”, that staff redundancies were inevitable and that the bank would not be paying out dividends on ordinary shares.

The expected large-scale protest failed to materialize as around 30 noisy protestors made their feelings heard outside the meeting.

Shareholders sat patiently as Hampton spoke of “the most difficult year in the Group’s history” and that “only a tiny majority of RBS staff were responsible for the major losses in 2008”.

But their anger boiled over during the much-anticipated Q&A session that followed as individual investors demanded answers from the under pressure board.

Their major concerns included the bank management’s remuneration packages, Sir Fred’s pension deal and an instant need for financial transparency in the future.

Calls were made from the audience for Sir Fred to be jailed for his part in the bank’s near-collapse, and shouts for him to be stripped of his knighthood were also met loud approval.

Current board member Gordon Pell came in for specific criticism after serving under Sir Fred during his administration of the company.

And at one point Pell was forced to address the audience in an attempt to defend his position on the board.

Addressing the shareholders, chairman Hampton defended RBS branch staff claiming “they deserve better from their top management” and that “only a few hundred people” were responsible for the bank’s current predicament.

He also laid the blame of the tumultuous last 12 months firmly on the bank’s decision to buy out Dutch bank ABN AMRO.

He said: “RBS excluding our share of ABN AMRO would have made an operating profit before tax in 2008.” 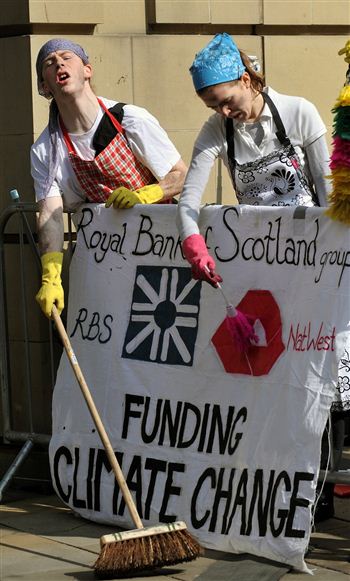 But fuming shareholders were left disappointed by what they heard from the bank’s board members.

John Phillipson, who had travelled from Wales to attend the meeting, was incensed as he left the building.

He said: “I arrived here full of hope for the future, but it seemed they were going through the motions up there. There were plenty of opportunities to come clean about a number of things, but it looked to me as if they wanted out of there as quick as possible.

“It’s a real shame that some staff will have to lose their jobs because of decisions made at the top.

“And, of course, anything they can do to take some of Goodwin’s pension back is to be applauded.”

And Joan Gibson, from Dundee, said: “I was hoping for fireworks today but in the end all it was a bit of a damp squib. I’ve got no doubts the shareholders have been misled, and things don’t seem to be changing.

“For the current board to retain two members from the previous board is an absolute disgrace. They are just as culpable as Sir freed Goodwin is and they should be sacked from their positions immediately.

“I feel really sorry for the bank’s low-level staff who will have to take a hit because the men at the top couldn’t do their jobs properly.”

Shareholders were also left reeling by the announcement that “it would not be appropriate” to pay out dividends on ordinary shares this year.

There was also concern that non-voluntary redundancies would inevitably occur throughout the company.

Hampton faced booing and jeering from the restless crowd during parts of the Q&A session as he revealed Sir Fred Goodwin’s contract is being scoured by the bank’s legal team to see “if it is indeed watertight”.

Outside the conference centre around 30 noisy demonstrators made their feelings known by chanting and waving placards.

One protestor from the People and Planet organization said: “I’ve traveled up from London to protest against these ‘fat cat’ bankers.

“They are making a fortune out of other people’s misery and somebody has to speak out. Anything I can do to change the current status quo I will do gladly.

“It’s time for the greedy bankers’ gravy train to pull into its final stop.”

Russell Brand: ‘Edinburgh is the most important city for my career’