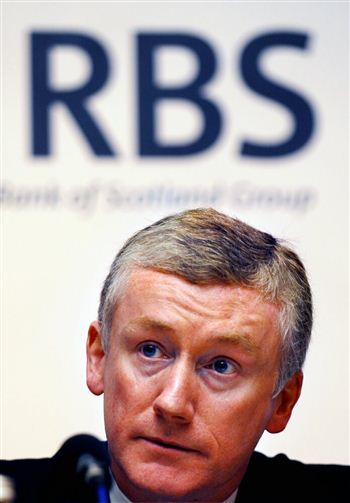 BELEAGURED RBS bosses are facing humiliating calls to pull staff out from an education scheme aimed at teaching kids about responsible finance.

The shamed bank is part of the management group for The Scottish Centre for Financial Education, an initiative started by Learning and Teaching Scotland.

The aim of the programme is to turn children into ‘responsible citizens’ and develop each child’s ‘financial capability’.

But there are calls for RBS to stand down from the initiative – after its irresponsible financial tactics got it into so much trouble it had to ask the Government to bail it out of the £20 billion debt.

Labour MSP for Glasgow Anniesland Bill Butler says RBS should agree step down from its role in the programme’s Management Group – and let someone more responsible stand in their place.

He said: “Given the events over recent months, I doubt there are many people in Scotland who would place much faith in the bank’s ability to provide appropriate financial education to schoolchildren.

“I want the Scottish Government to remove RBS from the Management Group and invite one of the organisations responsible for cleaning up the bankers’ mess, such as Citizen’s Advice Scotland, or more responsible financial institutions such as Credit Unions, to take is place on the group as soon as possible.

“RBS should not be having courses in good financial management, it should be attending them.”

RBS have been involved with the SCFE since it was launched by LTS in 2002.

The remit of the centre is to assist local authorities, schools and teachers by providing the best available financial education for all young people.

RBS contribute through their MoneySense programme – an interactive website for 11 – 18 year olds about money management.

But in the last six months, RBS has had to be bailed out by taxpayers – thanks to financial mismanagement by its senior bankers.

The bank was forced into nationalisation after admitting to losses of £24.1bn, the largest annual loss in a UK corporate company.

And ex-chief executive of the bank Sir Fred Goodwin – who quit just a month before the real extent of the troubles was revealed – has been dubbed the world’s worst banker thanks to his financial recklessness.

Shareholder Angela Gunn, from Edinburgh, says the bank should be steering well clear of trying to give out advice.

She said: “I think it’s laughable that Royal Bank staff are going into schools to teach kids about finance. After all that has happened recently you would think they would be the last company to be involved with something like this. Unfortunately, it looks like another mistake from the RBS bosses.”

And Edward Edmund, who has been banking with RBS for over 30 years, added that they were in no position to be giving financial guidance.

He said: “Those poor kids. RBS should be putting all their energies into getting their business back on track.
“It’s important for kids to learn about the financial sector, but the RBS management are hardly the perfect candidates to be teaching them.”

But the Royal Bank of Scotland claims that their advice is still valid.

A spokesman said: “The Royal Bank of Scotland Group has a 15-year legacy in delivering and supporting personal finance education and remains firmly committed to improving financial capability for all.

“Our MoneySense for Schools programme is the largest financial capability programme of its type in the UK.

“We have been instrumental in the development of the SCFE and have consistently responded to its expertise and guidance in shaping and delivering our programme which we believe continues to be wholly appropriate.”