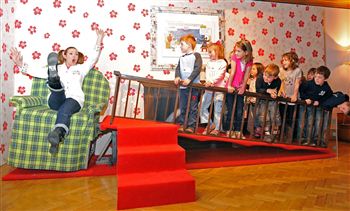 The actress appears in the popular children’s science programme Nina and the Neurons which encourages three-to-six year olds to create their own inventions.

The Edinburgh International Science Festival is the world’s first, and Europe’s largest, public celebration of science and technology, where hundreds of scientists and technologists share their passion with the public.

Organisers have been overwhelmed with the amount of interest in this year’s festival and over the weekend recorded around 8000 visitors to the opening exhibits.

TV’s Katrina said: “We’re here today to make children realise science can be fun and exciting and not just connected to stuffy old men who have their noses buried in textbooks.

“All of kids don’t even realise they are doing science when they are here because it’s just like playing. I think that is the key to grabbing their interest.

“Science is in everything and it’s really important for everyone to have a basic grasp of science.

“I think schools are doing a great job just now as there is a real focus on the subject and hopefully many children will continue to be enthused.” 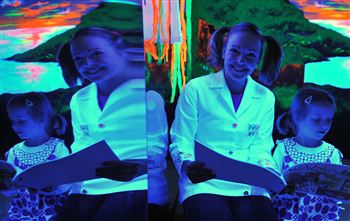 The festival has been inspiring people of all ages and backgrounds to discover the wonder of the world around them since 1987.

ASIMO: the world’s most advanced robot

This year, the Science Festival is working with 26 venues across Edinburgh and the Lothians.

Kids can meet ASIMO – the world’s most advanced humanoid robot – as it visits Scotland for the very first time.

Simon Gage, Director of the Science Festival, said: “This is the first day of the festival being opened fully and the response, as you can see, has been absolutely wonderful.

“About 8000 people came through the doors to see ASIMO the robot over the weekend and with venues all over the city we are hoping for up to 60,000 visitors overall..

“I think it’s really important that young people grow up in a culture in which you can associate science and fun, and hopefully we can provide that here at the festival.”

Mum-of-two Claire Millar said: “I’ve been queuing for a while now, but I’m sure it will all be worth it.

“The festival looks like a great way to learn about science and the kids are very excited. I just wish I had this type of event available when I was younger.

“And, of course, the kids are so thrilled to be meeting Nina in the flesh – it’s all they’ve been talking about for days.” 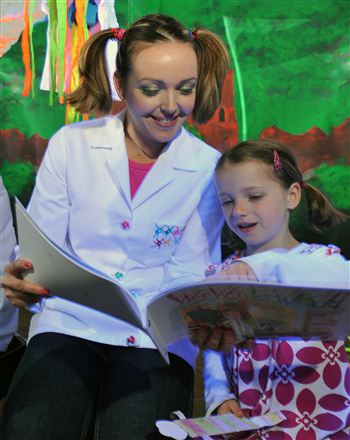 International guests, world thinkers and award-winning writers will feature in the extensive programme of debate and discussion – with topics ranging from the hot issues of today to scientific predictions for tomorrow.

The Edinburgh International Science Festival will take place between 4 – 18 April 2009.