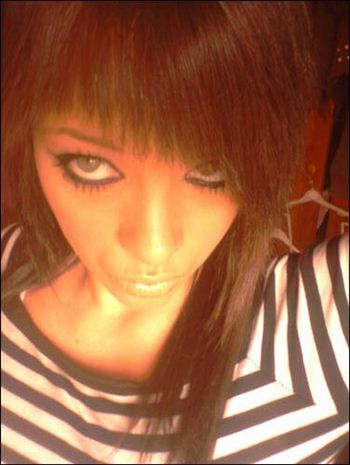 A GYMSLIP mum who had baby just four weeks ago was jailed for six months yesterday after being convicted of viciously attacking a girl she claimed had been bullying her through social networking site Bebo.

Justine Finlay, 16, was captured on CCTV stamping on her victim’s head at least 30 times despite several pals trying three times to haul her off the stricken girl she left for dead at bus stop.

As she was dragged from the dock at Dunfermline Sheriff Court yesterday she screamed “Please don’t – what about my bairn?”.

And in a dramatic twist last night she was released on interim bail after her legal team lodged an immediate appeal against the decision.

The court heard that Finlay repeatedly slammed her foot into her victim’s head and face, leaving her for dead in a bus stop.

The sickening attack was caught on CCTV cameras last year when Finlay, who has a four-week old child, was just 15.

The callous teen made a desperate bid to escape the dock in court yesterday, crying hysterically and screaming, “Please don’t jail me, what about my bairn?”

But Sheriff Ian Dunbar ruled that the vicious assault was “too serious” not to send the first offender down.

An argument on the social networking internet site was said to have sparked Finlay into a brutal drunken attack on a younger girl, also aged 15 at the time, who cannot be named for legal reasons.

Finlay claimed she was being threatened on Bebo by her eventual victim.

She said the girl left a message on her profile saying, “You’re a stupid little cow. I’ll batter you.”

Boozed up with a gang of teenage friends, Finlay lashed out at her victim outside the Partner’s bar in Cowdenbeath, Fife, last April.

With nothing more than a blank look on her face, Finlay watched on as her horrific assault was shown on TV screens in Dunfermline Sheriff Court yesterday.

Despite being pulled back three times by other youngsters, the ruthless teen shoved past them to repeatedly kick the girl as she laid helpless on the ground.

Her kicking was so ferocious that her shoe flew off at one point.

The police CCTV footage only caught the attack as it was taking place, meaning it may have lasted more than ten minutes. 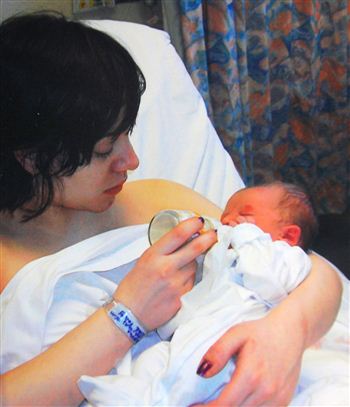 “They said she was going to batter her and that she was a stupid little cow.

“She doesn’t seek to excuse her behaviour in any way, but merely explains that this is why she did it.

“It is extremely fortunate that the girl didn’t have more serious injuries.”

Depute fiscal Tracy Plant said the victim was taken to Fife’s Queen Margaret Hospital for x-rays but had only suffered bruising to her head.

Sheriff Dunbar said: “We have seen what can only be described as a very graphic video which shows you kicking and stamping on the head of this unfortunate young lady.

“That’s bad enough, but you’ve got back time and again to repeat this action.

“You were clearly involved in some other violence at this stage.

“I’ve considered what’s in your social enquiry report and in particular your personal circumstances and the fact you have a very young child.

“But having seen the video, this assault is so serious that it can’t be dealt with any other way than by a custodial sentence.”

Finlay burst into tears, screaming at the Sheriff, begging not to be jailed.

A police officer had to hold the door to the dock as she tried to escape, before leading her to the cells.

Finlay was released on bail yesterday afternoon and returned to her parents’ home in Fife.