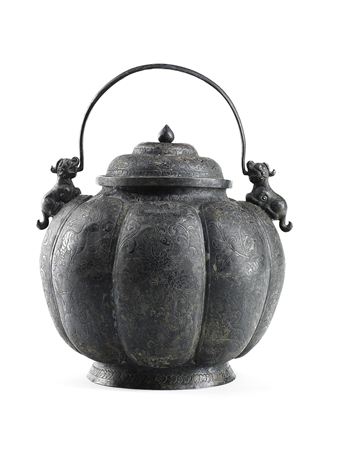 A RARE Chinese vase found among a box of bric-a-brac by a Scottish bargain hunter has failed to sell at auction.

Edinburgh auctioneers Lyon and Turnbull have refused to say how much the reserve price on the vase was, but did confirm the bidding stopped at £75,000.

The silver Tang vase – which dates from the ninth or 10th century – went under the hammer at Blenheim Palace after being found in a cardboard box at a sale in Scotland.

The anonymous seller, thought to be from the Scottish Borders, paid only around £100 for the rare artifact which is said to be worth approximately £120,000.

The vase is shaped like a melon is decorated with scrolling leaves, flowers, birds and animals.

Surprise at failure to sell

The owner said: “When I first saw the vase I thought that it was something remarkable and I am thrilled that it has been valued so highly.

But, the Scots’ luck has run out as the vase failed to sell.

Philip Gregory, of Lyon & Turnbull, said he was “surprised” by the outcome of the auction and that the recession may be to blame.

He said: “I’ve had a word with the owner, and he’s taking stock and will decide what he’s going to do next. He could keep it, or reoffer it at a sale when the economic climate is a little better.

“We were surprised, because we had so much interest in it, from far and wide.”

The Tang dynasty is often referred to as China’s Golden Age and a period of peace, creativity and prosperity due to extensive trade, Lyon & Turnbull said.

Asian specialist Anna Westin said: “These treasures were used often at court and were also given as gifts to important dignitaries.

“Silver of the Tang dynasty is rare, and most pieces of this type can be found in museum collections around the world. In particular, decorated lidded vessels of this type are very scarce.”