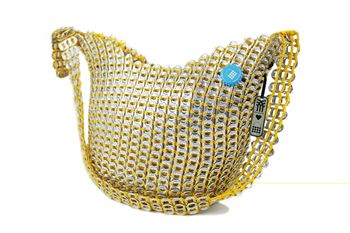 The multi-million selling artist has thrown her weight behind charity ‘Bottletop’, which raises funds through fashion and music and focuses on helping small education initiatives with a particular emphasis on sexual and reproductive health education.

One of the fundraising initatives is a beautiful ring pull bag crafted by 24 people in poverty-stricken Brazilian city of Salvador.

Each bag is handmade by linking hundreds of recycled ring pulls together in a crochet formation.

Annie, an eight-time Brit Award winner, said: “When I first saw the bags I was really blown away by them.

“At first glance you don’t realise what they’re made from. They just look beautiful and eye catching. I love the fact that they are not only created from recycling, but they are creating a source of skillful self sufficiency within communities.”

Set up in 2002 by Cameron Saul, Bottletop also has the support of other celebs such as Bill Clinton, Paris Hilton and Bob and Peaches Geldof.

The former-US President also applauded the charity which i also involved in life-saving work in Malawi and Rwanda.

He said: “Stemming the rise of Aids is one of the most urgent challenges facing the global community today. I applaud your efforts in this endeavour.

“What a wonderful and innovative way to stop the spread of this deadly disease.”

Lennox, 54, has also just help to raise £330 for the non-profit organization Education Africa, by selling off an original hand-painted mask in aid of the charity.

The former-Eurythmics singer has just released her greatest hits album and is well known for her charity work.