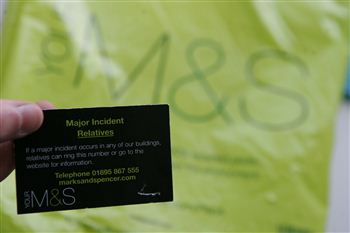 STAFF working for High Street giants Marks & Spencer have been issued with ‘Major Incident’ contact cards to hand to relatives – in case their stores are targeted by terrorists.

All 75,000 store employees have been handed the credit card size helpline cards detailing a website and phone number for relatives to call in event of a crisis.

And while a store chiefs insist there is nothing unusual in the move, employees say it has left them worried and angry that they could be targets.

“It makes me angry. It has upset people.

“A lot of my colleagues are in their fifties and sixties and don’t really pay attention to the news. They would have been none the wiser if it wasn’t for these cards.

“We were told the cards were supposed to reassure relatives.”

“But all it has done is spread panic.”

The M&S branded cards, emblazoned with a ‘Major Incident’ headline read: ‘If a major incident occurs in any of our buildings, relatives can ring this number or go to the website for information.’

The company gave out the emergency cards just a day after Gordon Brown said police had foiled a “major terrorist plot”.

However they did not specify M&S.

Instead spirited shoppers turned out in their droves over Easter to spend in the Spring sunshine, giving the economy a well-needed boost.

But tension was high among M&S staff over the weekend, with some claiming the caution cards caused more harm than good. 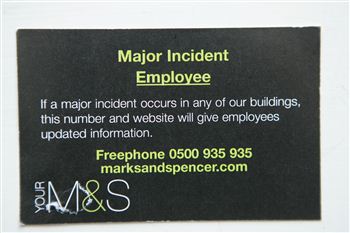 One added: “It hasn’t been handled very well at all.”

A spokeswoman for M&S played down the move saying it follows procedures used in the past.

She said: “Like many companies we issue these cards so our employees and their families have a contact number in the unlikely event of an incident, and have done so annually for over a decade.”

The firm employs 75,000 people, all of whom are now supposed to have the emergency contact cards, she added.

Counter-terrorism police are still quizzing 12 men – most of whom are Pakistani students – arrested in raids across the north west of England.

Officially, both the police and government say the exact nature and potential targets of the foiled terror plot is still unclear.