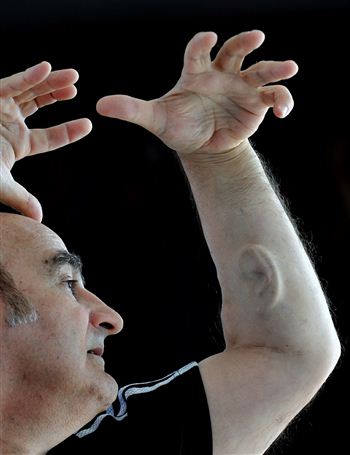 A PERFORMANCE artist who celebrates in shocking his audience has had a third ear surgically constructed onto his arm.

Stelarc, real name Stelios Arcadiou, focuses his work on extending the capabilities of the human body and is to make two appearances at the Edinburgh Science Festival this week.

The controversial artist has already undergone two complicated surgeries to implant the art-in-progress within his arm after struggling for months to find a surgeon willing to perform the contentious technique.

And his next madcap idea is to install a small Bluetooth microphone in the extra ear, so his audience can listen in and hear what the ear is hearing.

Stelarc, 62, said: “The ear is part of a process – a conceptual raison d’etre. It is a permanent part of me now, as after six months it becomes fused to the arm and has its own blood supply.

“The final procedure will re-implant a miniature microphone to enable a wireless connection to the Internet, making the ear a remote listening device for people in other places.

“For example, someone in Venice could listen to what my ear is hearing in Melbourne.

“This project has been about replicating a bodily structure, relocating it and now re-wiring it for alternate functions. We have evolved soft internal organs to better operate and interact with the world.

“Now we can engineer additional and external organs to better function in the technological and media terrain we now inhabit.”

The Australian artist’s outrageous past performances have seen him hanging naked above a New York street using nothing but large hooks embedded in his skin, and allowing his body to be controlled remotely by electronic muscle stimulators connected to the internet.

In another performance he lowered a tiny camera into his stomach, lungs and colon through a tube and showed his internal organs on a TV monitor.

Ingi Helgason, from Edinburgh Napier University’s Centre for Interaction Design, is part of the team involved in bringing Stelarc to the Science Festival.

She said: “Stelarc’s work aims to connect people through technology and shows the impact that it can have on our lives.

“People can be connected through social networking sites such as Myspace and Facebook, and this is almost a more extreme extension of that.

“His work seems frivolous but is does raise some serious issues surrounding the body and technology.”

He has also performed with a robotic third arm, and a pneumatic spider-like six-legged walking machine which sits the user in the center of the legs and allows them to control the machine through arm gestures.

Until 2007, he held the position of Principal Research Fellow in the Performance Arts Digital Research Unit at Nottingham Trent University in Nottingham, England, and is currently a visiting Professor in the School of Arts at Brunel University, West London.

Originally from Cyprus, Stelarc has two daughters, one of whom, Astra Stelarc, is continuing in her father’s idiosynctaric artistic footsteps.