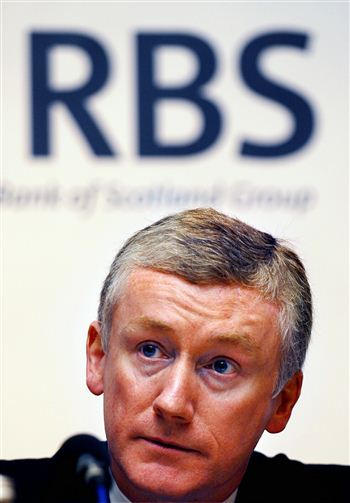 DISGRACED banker Sir Fred Goodwin was an “unremarkable” student – because he wasted his time at university addicted to pinball machines.

The vilified former-banking boss would “dodge lectures” while studying law at Glasgow University just to get in extra practice, a close friend has revealed.

Goodwin was also exposed as a right-wing “true blue Tory” who was in favour of maintaining the university’s controversial male-only bar which was decorated with tasteless murals of naked women.

Alan Smart, 49, a former-head of broadcasting at the Scottish Parliament, admitted Goodwin was a “likeable guy but he didn’t shine” during his spell studying law in the 1970’s.

Mr Smart said: “I was vice-president of the Student representative Council and my brother was head of the Labour club, but Fred wasn’t really anything.

“You would think that someone who was going to be one of the world’s leading bankers would have been president of the accounting society or something, but to the best of my knowledge he just sank without trace.

“He was a good, likeable guy but he didn’t shine.”

Mr Smart grew up beside Goodwin in the middle-class Paisley suburb of Ralston, and says the ex-bank boss was addicted to electronic games.

He said: “We used to meet quite often at lunchtimes and he played a lot of pinball. For a while we played every lunchtime and you could see the competitive streak in him.

“Sometimes we would doge lectures if we went on a good run and won a lot of bonus games.

“The other game that was a real rave at the time was Asteroids. He was really good at that as well.

“He wasn’t a big boozer, he was just an unassuming nice guy who was good company. He would lend you a quid or tap you a fiver and he would wait for you if you were late.”

After years of protests, the union was forced to admit female students during the 1980s.

Not a man of mystery

Mr Smart said: “Fred was very traditional and he was for an all-male bar. The rest of us were mostly for mixing.

“I remember saying to Fred once that I found the pictures in the bar offensive and he said he thought it was great. I’m sure he did it to wind me up, I’m not saying he was sleazy or anything.

“He was not a man of mystery but he was certainly not going around pulling birds and bragging about it. I don’t even recall him having a girlfriend and he certainly wasn’t a disco-goer.”