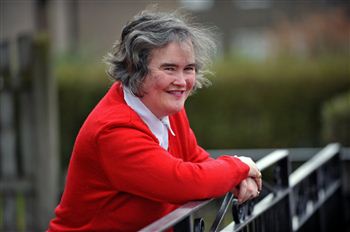 SHE melted the hearts of Saturday night TV viewers and won over the usually acerbic judges.

Now it seems Britain’s Got Talent star Susan Boyle is proving a smash hit on YouTube too – racking up more than ONE MILLION views in the 48-hrs since he small screen appearance.

More than 8000 comments, mostly offering support, have also been left for the churchgoer from Blackburn in West Lothian suddenly dazzled by the limelight.

Yesterday drinking in the magnitude of the overnight success that has followed her rendition of ‘I Dreamed a Dream’ from West End hit Les Miserable has brought her, she candidly admitted yesterday to be somewhere between overwhelmed and overjoyed by the reaction.

One step at a time

Susan, 48, said: “I’m just taking it one step at a time. The phone’s never stopped ringing.

“Apparently even Australian radio want to talk to me too now.”

Grinning from ear to ear and waving to well-wishing neighbours, she said: “I just found out my video’s had one million hits – I can’t believe it.

“My brother lives in Australia and didn’t know about the show, but he just called me to say he’d seen me on YouTube.
“Everyone’s been so lovely and supportive, and I’ve had loads of well-wishers.

“I’m just taking it one step at a time, but so far I’m enjoying it immensely”
Susan is now a huge celebrity in her hometown and said she’s been staggered by the reaction from ordinary people on the street.

Walking through her local shopping centre people shouted their congratulations.

She even attracted a few wolf whistles from teenage boys teasing her about never being kissed.
But when asked if her new celebrity status brought her any romantic attention she flustered: “No comment”.

Already she’s admitted to only having eyes for judge Piers Morgan.

And she said: “The judges are good at their job, very professional and fair.”